WILLIAMS LAKE, B.C. – A mix of dry conditions and forecast lightning has officials in British Columbia considering closing access to a vast section of its backcountry to mitigate the wildfire risk. 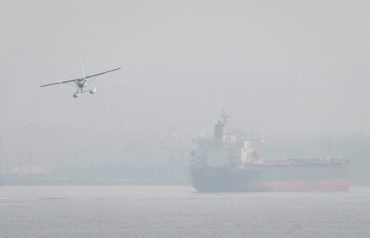 Smoke from wildfires burning in central British Columbia hangs in the air as a seaplane prepares to land on the harbour near the bulk carrier Nanakura, in Vancouver, B.C., on Thursday August 10, 2017. THE CANADIAN PRESS/Darryl Dyck

Restrictions on access to all Crown land in the Cariboo fire centre would go into effect at noon on Friday as the province continues to battle what Premier John Horgan has said is the worst fire season since the 1950s. A final decision was scheduled to be made Friday morning.

There were 148 fires burning in the province on Thursday with the majority of new starts in recent days attributed to lightning.

“We have very, very dry conditions all around the province, so any additional fires starting have implications about the resources available to fight them,” he said.

About 3,700 personnel including firefighters, crew from other provinces and overseas and forestry contractors are working under the BC Wildfire Service in response to the crisis.

Kevin Skrepnek with the wildfire service said a low pressure system rolling in Friday will bring cooler conditions and thundershowers, but it’s unclear whether the combination of rain and lightning will help or hinder firefighting efforts.

Worsening fire conditions in the Anahim Lake area, in the Central Coast Regional District, prompted an evacuation order Thursday, affecting a number of small communities including the Ulkatcho First Nation.

The First Nation’s website says roughly 700 people live on the reserve in the area with another 200 members off-reserve. Residents are being directed to reception centres in Prince George.

The final decision on the backcountry restriction will depend on wind conditions. Donaldson added exemptions to some sites in the region that have a lower risk for fires is possible.

A restriction order would mean people cannot remain in or enter the area without the prior written authorization. Exceptions include people who are travelling to or from their principle residence, a person acting in an official capacity or those who support efforts to fight wildfires.

The area is a popular destination for hikers and campers.

Tourism officials have begun assessing the impact of the devastating wildfires on the travel sector.

Maya Lange of Destination BC, the province’s tourism planning and marketing corporation, said Wednesday businesses outside the fire zones have complained of cancellations.

Lange said firm data reflecting the financial implications won’t be ready for another two to three months, but the number of tourists coming into the province week-to-week has remained on track. That may mean visitors are changing their travel plans within the province rather than cancelling their trips entirely, she said.

While the ban may be disappointing for some, Donaldson said anyone questioning the breadth of the restrictions should trust the experts.

“We’ll get through this if everybody pulls their weight and that way we won’t be faced with further and expanding fire situations,” he said.

Some parts of the province have already been closed to visitors.

Jeff Leahy of BC Parks said Wednesday officials understand restrictions and closures to the backcountry and parks, especially in the hard-hit Cariboo region, can have a significant impact on businesses.

The duration of the potential backcountry ban will depend on conditions in the Cariboo region through the rest of the fire season.

“The intent is always to lift closures, such as the one contemplated, as quickly as possible,” Donaldson said. “Awareness of other factors, like economic factors, is on the agenda but public safety is number one.”