B.C. extends province-wide state of emergency for the third time

British Columbia’s Ministry of Public Safety & Solicitor General announced on Friday that it has formally extended its province-wide state of emergency for the third time. 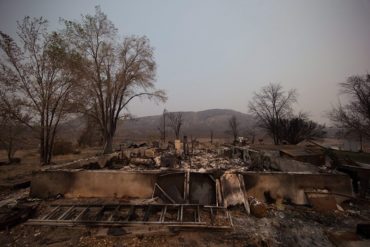 A home destroyed by wildfire is seen on the Ashcroft First Nation near Ashcroft, B.C., on Tuesday August 1, 2017. THE CANADIAN PRESS/Darryl Dyck

The state of emergency now runs through to the end of the day on Sept. 1, the Ministry of Public Safety & Solicitor General said in a statement. Previous extensions were on Aug. 4 and July 19.

The state of emergency declaration ensures that federal, provincial and local resources can be delivered in a coordinated response to the wildfire situation. The declaration also gives agencies – including Emergency Management BC, the fire commissioner, the Ministry of Forests, Lands, Natural Resource Operations and Rural Development and the RCMP – the authority, under the Wildfire Act, to “take every action necessary to fight the wildfires and protect residents and their communities,” the statement said.

For compensation, the province is providing ongoing, direct financial support to evacuees, with $600-per-household funding being renewed every 14 days until evacuees return home. For eligible small businesses affected by the fires, they can receive a $1,500 emergency grant, delivered through the Canadian Red Cross. As well, earlier this week the governments of British Columbia and Canada reported that they are working together to determine the type of assistance that may be required by the province’s agriculture to recover from the wildfires. The type of costs under consideration include: costs to re-establish perennial crop and pasture production damaged by fire; costs related to ensuring animal health and safety; and feed, shelter and transportation costs.

On Thursday, Kevin Skrepnek, B.C.’s chief fire information officer, told the Canadian Press that about 8,944 square kilometres of land has been scorched by the wildfires to date, breaking the previous record of 8,550 square kilometres, set in 1958. A total of 1,029 fires have occurred since the start of the wildfire season on April 1.

The last provincial declaration of state of emergency before the current wildfire situation was issued in August 2003 to deal with wildfires.