The governments of British Columbia and Canada have announced that they are working under the federal-provincial AgriRecovery disaster framework to determine the type of assistance that may be required by the province’s agriculture sector to recover from the impact of wildfires. 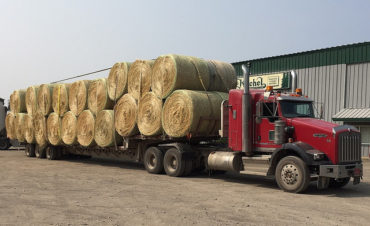 The B.C. Ministry of Agriculture reported on Aug. 8 that it was continuing to work with the Government of Canada to ensure provincial ranchers “have access to either existing or new programs as part of the overall response to the devastating wildfires in the province’s Interior.” Photo: Province of British Columbia flickr.

Government officials are working together to quickly assess the “extraordinary costs” farmers are incurring and what additional assistance may be required to recover and return to production following the wildfires, noted a joint statement from B.C.’s Ministry of Agriculture and Agriculture and Agri-Food Canada. The types of costs under consideration include: costs to re-establish perennial crop and pasture production damaged by fire; costs related to ensuring animal health and safety; and feed, shelter and transportation costs.

“The AgriRecovery response will help B.C. ranchers and farmers recover from their losses, and return to their land and their livelihoods,” Popham said in the statement. “Our governments are working with producers, local officials and stakeholders and the results and spirit of resilience is collective and clear.”

Kevin Boon, general manager of the BC Cattlemen’s Association said that ranchers in the province are “happy to hear that the two governments are doing the necessary assessments that will be needed to give them a fighting chance to get back into business. These fires have caused unprecedented impacts for not only the cattle industry but for all of the rural communities. We urge the governments to do everything possible in their assessment, including looking at the parameters of the program, to get as much financial support as possible into these businesses.”

A federal-provincial-territorial cost-shared suite of business risk management (BRM) programs is available to help farmers in managing disaster events, including wildfires, the statement said. These programs include AgriStability, AgriInvest and AgriInsurance. AgriRecovery is a federal-provincial-territorial disaster relief framework intended to work together with the core BRM programs to help agricultural producers recover from natural disasters.

On Aug. 8, the B.C. Ministry of Agriculture reported that it was continuing to work with the Government of Canada to ensure provincial ranchers “have access to either existing or new programs as part of the overall response to the devastating wildfires in the province’s Interior.” Although the number of confirmed livestock injures and losses was not yet available, the provincial ministry said in a press release that ranchers have an estimated 30,000 animals within the boundaries of the wildfire-affected areas. At the time, more than 500 ranchers had received support and information through the wildfire emergency response.

In late July, Boon estimated that the wildfires have charred about 1,000 square kilometres of ranch land. Cattle, fences and infrastructure have all been destroyed. Boon expected that financial losses for the association’s nearly 1,200 beef producers will top “hundreds of millions of dollars,” the Canadian Press said.