Concerns over fracking and earthquakes in B.C. disputed

Senior officials with BC Hydro have “quietly feared for years that earthquakes triggered by natural gas industry fracking operations could damage its Peace River dams,” the Canadian Centre for Policy Alternatives (CCPA) has charged. 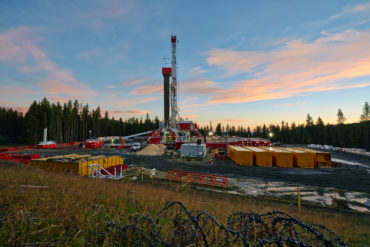 In a statement posted to its website on Tuesday, the CCPA said that the Crown corporation disclosed its concerns “which focus on the possibility that fracking could trigger earthquakes more powerful than some of its dams are designed to withstand” after it filed a Freedom of Information request. The CCPA said on its website that it is “an independent, non-partisan research institute concerned with issues of social, economic and environmental justice.”

But in a press release issued also on Tuesday, Chris O’Riley, deputy CEO with BC Hydro, said that to the Crown corporation’s knowledge, there has never been any fracking activity around – within five kilometres of – BC Hydro’s dams.

“That said, our dams are built to withstand much larger ground motions associated with higher magnitude events that are much longer in duration than fracking,” Riley said. “In fact, our dams can withstand events many times larger than those associated with fracking. Fracking by itself cannot generate large magnitude earthquakes.”

BC Hydro added that all earth-fill dams are purposely designed to have some seepage. “Fracking does have the potential to increase the amount of natural seepage flow around and under these dams which only poses an issue of increased costs due to maintenance and operational requirements – not a dam safety issue,” the release said.

According to CCPA, “documents released by the Crown corporation under the FOI show that in December 2009, senior officials at BC Hydro became alarmed at oil and gas industry operations on lands near its Peace Canyon Dam.” The dam is 23 kilometres downstream from the W.A.C. Bennett Dam, a 49-year-old structure that impounds the world’s seventh-largest hydro reservoir by water volume.

Of concern, CCPA reported, was an experiment underway to extract methane gas from coal seams in proximity to the Peace River, something that had never been tried in B.C., “although it had been done extensively in several U.S. states and in Alberta with sometimes disastrous results, including instances of water so badly contaminated with gas that people could set their household tap water on fire.”

CCPA reported that a company had planned to drill and frack up to 300 more wells, with at least three of them situated close to the Peace Canyon Dam. The plans “alarmed” BC Hydro’s then-chief safety, health and environment officer who called them an “immediate” threat to the region’s hydro facilities and “immediate and future potential risks to BC Hydro’s reservoir, dam and power generation infrastructure.” The safety officer also reportedly said that the fracking could cause natural gas industry-induced earthquakes that were greater in magnitude “than the original design criteria for the dam.” In addition, CCPA, the safety officer was concerned that fracking could “reactivate ancient faults in the region,” potentially setting the stage for earthquakes.

However, the coal bed methane extraction method was a short-lived phenomenon and currently there is no drilling or fracking for such gas in the province. Fracking for shale gas become another concern in later years, CCPA said.

While there has never been any known fracking activity around BC Hydro dams, there are existing tenures, the Crown corporation said in its press release. The BC Oil and Gas Commission has put restrictions in place so that no new tenures will be issued within 5 kilometres of BC Hydro’s dams, including around the Site C Clean Energy Project area. The commission has also agreed to notify BC Hydro prior to any planned activity in any of the existing tenures so that BC Hydro “can plan its operations and maintenance activities accordingly.”

The release concluded that BC Hydro’s “dam safety program meets the highest standards, including 24/7 instrumentation monitoring, weekly inspections, bi-annual engineering reports and regular expert reviews of all our dams by international, independent experts.” Over the next 10 years, BC Hydro is also investing approximately $1.9 billion in dam safety across the province.

1 Comment » for Concerns over fracking and earthquakes in B.C. disputed