The government of British Columbia announced on Monday that it has hired an industry expert to consult with and help prepare the taxi industry for a “made-in-B.C.” solution to ridesharing. 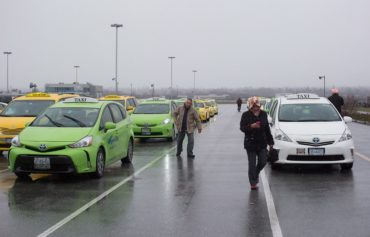 Taxi drivers walk past cabs while waiting for passengers at Vancouver International Airport, in Richmond, B.C., on Tuesday March 7, 2017. British Columbia will allow ride-sharing services like Uber to operate in the province by the end of this year, while introducing initiatives that it says will help the taxi industry modernize and remain competitive. THE CANADIAN PRESS/Darryl Dyck

Transportation and Infrastructure Minister Claire Trevena said in a press release that the provincial government has hired industry expert Dan Hara of Ottawa-based Hara Associates. Hara is an industry professional who has been providing consultation for vehicle-for-hire regulators through the company since 1987, the Ministry of Transportation and Infrastructure said in a backgrounder.

“He is renowned for his knowledge of the taxi industry in North America and has undertaken a number of reviews for cities and provinces across Canada as they brought in commercial rideshare services,” the ministry reported. Past clients include the cities of Edmonton, Sudbury (Ont.), Halifax, Calgary, Ottawa, Waterloo (Ont.), Hamilton (Ont.), Mississauga (Ont.) as well as Los Angeles, Washington, D.C., San Francisco, the State of Victoria (Australia) and Saudi Arabia (via Ernst & Young).

Related: Brakes tapped on ridesharing in B.C. despite election promises to allow Uber

“People want more options for getting around quickly, safely and affordably, including ridesharing,” Trevena suggested in the release. “That’s why we hired industry expert Dan Hara to help us deliver a made-in-B.C. approach to ridesharing that will keep people safe, and work for all regions of the province.”

Trevena noted that jurisdictions that failed to move carefully when they brought in ridesharing have seen “safety issues, unpredictable prices and unstable access to services.”

It is anticipated that Hara will finish his work in early 2018 and his recommendations will inform how the province will create a made-in-B.C. system that will provide more “choice and convenience” for the people of the province, as well as modernize safety regulations, vehicle licensing and the six different pieces of legislation that regulates the industry.

The review will include:

Related: Uber launches fleet of mapping vehicles in Vancouver ahead of fall rollout

The province’s plan and timeline to bring ridesharing services into the province will be delivered in 2018, with legislative changes anticipated for the fall.

A copy of the terms of reference can be found at http://www.th.gov.bc.ca/rpt/Documents/Modernizing-Passenger-Directed-Vehicle-Services-Terms-of-Reference.pdf.

On Tuesday, the Insurance Bureau of Canada (IBC) released the results of a poll of 1,000 British Columbians that found that 78% of those polled “expressed their desire for more choice and more competition in the province’s auto insurance system.” Conducted by Maple Leaf Strategies on behalf of IBC, the poll also found that 89% of respondents believe that competition will allow them to shop around and possibly save money on coverage. “British Columbians do not necessarily want to eliminate ICBC; they want a competitive model where they can make a choice, even on basic car insurance,” IBC said in the poll.

“Competition provides a powerful incentive for any company to keep prices down, to deliver the best service, and to understand and meet the needs of its customers. Auto insurance is no exception to this rule,” said Aaron Sutherland, vice president, Pacific with IBC, in a press release. “These polling results show that British Columbians overwhelmingly want the ability to choose the auto insurance provider that is best for them. Canada’s private insurers are eager to better serve B.C. drivers so that they can take advantage of the benefits of competition and choice in auto insurance.”