British Columbia’s Minister of Transportation and Infrastructure said on Thursday that Highway 97 South from Mackenzie Junction to Chetwynd will open by noon, one week after flooding from heavy rainfall. 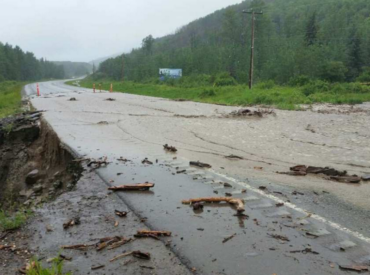 A flooded road at Stone Creek 15 kilometres west of Chetwynd. High levels of rainfall have caused rapid increases in water levels in streams in the Peace region. PNG / Handout

Todd Stone said that the highway will be open to “single-lane alternating traffic with intermittent delays at a number of sites along the route.” Crews will continue to work 24 hours a day to open the route to full traffic, the Ministry of Transportation and Infrastructure said in a media release.

Those using the highway for commercial or public travel are advised to plan for single lane alternating traffic, some of it piloted, at several sites along the corridor. Motorists should also allow extra time for their trip. Overweight and over-dimensional loads are not permitted at this time, the release added.

“This is important for the local residents who’ve been cut off from their communities for several days after the unprecedented rainstorm that severely damaged whole sections of the highway and washed away a number of side roads,” said Stone. “Highway 97 South is now open ‘round the clock thanks to the tireless work of our highway crews, maintenance contractors and volunteers.”

Nearly 200 pieces of equipment have been working continuously to safely restore the numbered highways and side roads washed out by the flooding, the release said. 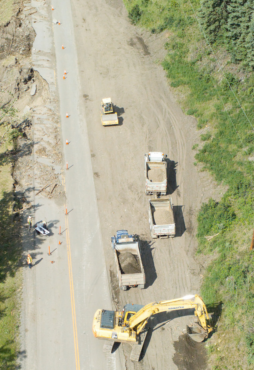 Highway 29 South opened Saturday evening to single-lane alternating traffic and Highway 2 in Dawson Creek is currently open to two lanes, with crews aiming to have it back to four lanes by next week. Of the 40 side roads affected, 21 are now open to a minimum of single-lane alternating traffic. The total number of repair sites is 186, all primarily in the South Peace area.

“We have a lot of resources up here working hard to repair the damaged roads and ensure they’re safe for travel and I can say that residents are extremely grateful to the highway crews and staff who’ve pitched in to help,” said Mike Bernier, MLA for Peace River South.

While a number of affected routes have reopened, there is still much work to be done on area roads to restore them to pre-flood conditions, the ministry pointed out. “Ministry crews are assessing the damage to bridges and roads and will be doing the work necessary to reinforce them for the long term against another event of this nature,” the release said, adding that the ministry anticipates it will have crews and equipment working in the area “for some time.”

On June 15, the mayor of the District of Chetwynd declared a state of local emergency following a “very heavy rainfall event.” As of noon that day, Environment Canada reported that 79 millimetres of rain had fallen, and a further 30-50 millimetres was expected within 24 hours.

Progress being made at Commotion Creek on #BCHwy97, south of #Chetwynd, after heavy flooding earlier this week. pic.twitter.com/k2BKjNwXPC

My cousin's partner Denise Friesen shows us how their home west of Chetwynd was devastated by flooding @NEWS1130 pic.twitter.com/OPKhjvITtP