To better understand and mitigate the impacts of flooding along the Fraser River and southern coast of British Columbia, the province announced on Monday that it is working collaboratively with all partners in the strategy and the Fraser Basin Council (FBC) by committing $1 million in funding.

The funding will assist with implementation of Phase Two of the Lower Mainland Flood Management Strategy, the provincial Ministry of Transportation and Infrastructure noted in a press release. The impacts of flooding along the Fraser River and southern coast were identified in Phase One of the report. 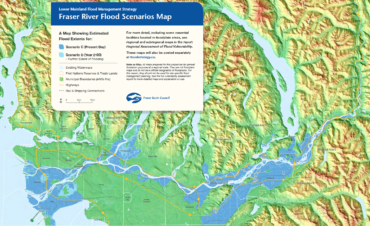 In July of 2014, the province provided $124,000 in support of Phase One of the strategy, a program that brought together 43 government and private-sector partners. Phase One has built a better understanding of flood hazards and flood vulnerabilities and identified a range of mitigation options that can be implemented at site-specific, community and regional levels to contribute to a comprehensive approach to flood management, the release noted.

The non-profit FBC is managing the program on behalf of the strategy partners. The FBC, a charitable organization, works to advance sustainability in the Fraser Basin and throughout British Columbia and is a collaboration of four orders of government – federal, provincial, local and First Nations – along with those from the private sector and civil society.

“Given the gravity of the Lower Mainland Flood Management Strategy’s Phase One findings and the potential flood-related impacts to the lives and livelihoods of British Columbians, this new $1 million in funding will inform appropriate next steps and future decisions on flood mitigation investments, as well as flood management policies and practices,” the release said.

As part of the Phase One findings, the Ministry of Forests, Lands and Natural Resource Operations released the Lower Mainland Dike Assessment Final Report, which assessed 74 dikes along the lower Fraser River. The report found that the dikes do not meet current provincial standards for crest height and geotechnical stability. “These findings will help further inform the strategy and improve flood resiliency as work begins on a collaborative project to identify, map and prioritize dikes that most urgently need upgrading,” the release said.

The ministry reported that the province is working to better align provincial policies and programs to identify natural hazard risks and address mitigation priorities throughout British Columbia, and weighing options for a new disaster mitigation program that addresses these risks, as well as those related to climate change. Current negotiations between Emergency Management BC and the federal government are underway to address funding for this enhanced natural hazard mitigation program, which will complement and augment the works proposed in the Fraser Basin Council-led flood mitigation strategy.

In the 2016 budget, the B.C. government announced $65 million to help keep communities safe, including $15 million for public safety preparedness and $50 million for community-hazard mitigation projects, such as upgrades to dikes and flood protection.

“There’s an increasing risk of a major coastal or Fraser River flood in the Lower Mainland, which would trigger widespread disruption and catastrophic loss estimated at $20 billion or more,” FBC chair Colin Hansen said in the release. “The business case for improved flood mitigation has been made under the Lower Mainland Flood Management Strategy. It’s now time to move to a regional flood action plan.”