Mike Farnworth said Monday the cleanup and repair work ahead in southern B.C. is massive, but after three weeks of all-out efforts by volunteers, Canadian Forces soldiers and emergency officials to secure dikes, rescue people and animals and salvage properties, the rebuilding job must start.

“With weather conditions improving and floodwaters receding dramatically in recent days, we are shifting to recovery and debris-management work,” he said at a news conference.

The minister said many of the hundreds of Canadian Forces soldiers deployed to B.C. to help after the torrential rains will return to their home bases, but a company of 126 soldiers will remain in B.C.

Soldiers were instrumental in setting up a portable dam across Highway 1 near Abbotsford to prevent further flooding, helping sandbag areas prone to more flooding and providing relief and equipment in flood-stricken communities. 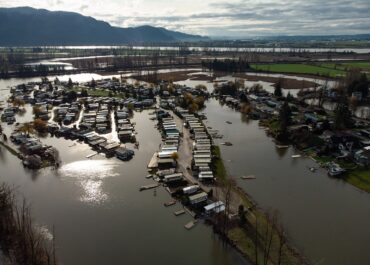 Properties on Hatzic Lake are surrounded by high water after floodwaters began to recede, near Mission, B.C., on Sunday, December 5, 2021. THE CANADIAN PRESS/Darryl Dyck

“The Forces have so far provided enormous help in our communities when they needed it most,” said Farnworth. “We would not have gotten through the onslaught of heavy rains without them.”

Gas rationing will continue in parts of B.C. despite the reopening of the Trans Mountain pipeline following a three-week precautionary shutdown because of the disaster, he said.

The lifting of the 30-litre purchase limit will occur as soon as the pipeline system is able resume full service, but until then, fuel limits will remain in place until Dec. 14, Farnworth said.

“While we are encouraged that Trans Mountain has announced they are resuming pipeline operations, this will not be an immediate fix and it will take some time to resume normal operations,” he said.

Trans Mountain Corp. said in a statement that it was able to safely restart the pipeline on Sunday.

Drivers in the Lower Mainland, Sea to Sky region, Sunshine Coast, the Gulf Islands and on Vancouver Island were rationed in order to keep fuel available for emergency vehicles and commercial or essential operators.

Transportation Minister Rob Fleming said progress is being made in reopening damaged transportation routes, but the Coquihalla Highway, a major route to B.C.’s Interior, remains closed to all traffic until at least late January after sustaining bridge and road damage at numerous sites.

Rail traffic through the Interior to and from Vancouver has restarted for both Canadian National and Canadian Pacific railways, Highway 99 from Pemberton to Lillooet was reopened following a second slide, while Highway 7 between Agassiz and Hope was opened to non-essential traffic following several slides and travel restrictions, he said.

“We’re trending in the right direction and that’s something we can all be proud of,” said Fleming. “But we have a long way to go. We have to be clear about that. Our transportation network and supply chains continue to be challenged and we need to limit our travel unless it’s necessary.”

Highway 3 into the Interior is the only major open route, but traffic is restricted to commercial vehicles, he said.

Repairs to slide-damaged sections of the Trans-Canada Highway through the Fraser Canyon are underway, but are not expected to be complete until mid-January, while Highway 8 between Spences Bridge and Merritt remains inaccessible, but efforts are being made to secure some access through forest service back roads, he said.

“Every day gets a little bit closer to where we need to be,” Fleming said.

The B.C. government has not provided a damage estimate caused by the floods and slides other than to say it will hugely expensive.

Farnworth said he will be in Merritt on Tuesday to meet with municipal officials, Indigenous leaders and local residents. About 7,000 residents in the town were either chased out by floodwaters or forced to leave when the sewage system shut down in mid-November.

Abbotsford Mayor Henry Braun announced more people forced to leave their homes will be able to go home in the central Sumas Prairie region. However, an evacuation alert still remains up for the area.

He said during a news conference on Monday that water levels in Sumas Prairie had dropped almost two metres over the past few days, but “it will still be some time before that area becomes accessible again.”

Many fields are still under more than one metre of standing water, he said.