VANCOUVER – Researchers in British Columbia have developed a spray-on concrete they say will protect schools from even the strongest earthquakes and cut the cost of seismic retrofits in half. 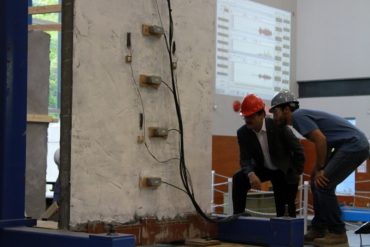 Sensors were installed on an eco-friendly ductile cementitious composite (EDCC)-reinforced wall prior to an earthquake simulation test. Credit: UBC.

The new material will be used in the next few months to seismically upgrade a Vancouver elementary school and researchers say they hope to expand the application to other buildings around the province.

Salman Soleimani-Dashtaki, a PhD candidate at the University of British Columbia, says spraying a 10-millimetre layer of the fibre-reinforced concrete on a masonry wall kept it from crumbling in a simulation that mimicked the magnitude 9 quake that hit Japan in 2011.

He says fibres allow the material to behave more like steel and it’s more environmentally friendly than traditional concrete because 70 per cent of the cement used to make it is replaced with fly ash, an industrial byproduct.

UBC President Santa Ono says the innovation will allow the B.C. government to reinforce double the number of schools for the same price.

B.C. Advanced Education Minister Melanie Mark says the new technology will have a far-reaching impact and could save the lives of people not only in B.C. but around the world.