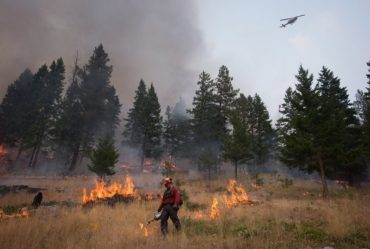 B.C. Wildfire Service firefighter Max Arcand uses a torch to ignite dry brush as a helicopter drops water on the other side of a fire guard during a controlled burn to help prevent the Finlay Creek wildfire from spreading near Peachland, B.C., on Thursday, September 7, 2017. THE CANADIAN PRESS/Darryl Dyck

The state of emergency was declared on July 7 and extended four times over the nine weeks that followed, the ministry noted in a press release on Friday.

The ministry said that “while the extraordinary powers of the provincial state of emergency are no longer required, the wildfire season is not over.” As of Friday morning, 153 wildfires were burning in B.C., with 11 evacuation orders affecting approximately 3,152 people. Another 23 evacuation alerts are affecting 5,762 people. During this year’s wildfire season, approximately 65,000 people were evacuated from their homes, the ministry said.

The provincial state of emergency is an extraordinary measure taken to ensure public safety and the coordinated response to this summer’s wildfire season, which saw more hectares burned than at any other time in the province’s history (In mid-August, the BC Wildfire Service reported that about 8,944 square kilometres had been scorched by fires, breaking the previous record of 8,550 square kilometres, set in 1958).

“Given the weather forecast and the remarkable efforts of the BC Wildfire Service to contain and extinguish fires, the province now is in a position to allow the state of emergency to expire and return to a standard emergency response,” the Ministry of Public Safety and Solicitor General said in the release, adding that the Canadian Forces will be demobilizing personnel who have been assisting with response efforts this season.

The last provincial declaration of state of emergency before the current wildfire situation was issued in August 2003 to deal with wildfires.

The expiration of the state of emergency came one day after the province said that it was providing the Thompson-Okanagan Tourism Association (TOTA) and the Kootenay Rockies Tourism Association (KRTA) with financial support of $200,000 each to help with tourism-related impacts from the B.C. wildfires.

Working in close collaboration with the regional destination marketing organizations, Destination BC has developed and is implementing a provincial marketing plan to help B.C.’s tourism industry recover from the impacts of the wildfires, the statement said. Over the last few months, Destination BC has kept travellers informed about the areas that are affected by the wildfires, while ensuring tourists know that most areas of B.C. remain open for business.

Tourism is a major economic driver in B.C., employing 127,000 people throughout the province, supporting nearly 19,000 tourism-related businesses and contributing $7.4 billion toward the province’s gross domestic product. In 2015, the B.C. tourism industry generated $15.7 billion in revenue, a 5.3% increase over 2014 and a 37.3% increase from 2005.

Glenn Mandziuk, president and CEO of TOTA, said that “tourism is the number one economic generator in the Thompson Okanagan region and this year has realized significant business loss due to the wildfires, road and park closures, as well as issues with smoke and air quality.” Added Kathy Cooper, CEO of KRTA: “Our ongoing wildfire economic impact survey from this season shows that tourism businesses in the Kootenay Rockies have been highly impacted by loss of visitation and revenue due to the wildfire situation in our area and across the province.