B.C. transportation ministry to use helicopter to clear Vancouver-area bridge cables of snow

British Columbia’s Ministry of Transportation and Infrastructure announced on Friday that it will use a heavy-lift helicopter to clear cables on the Alex Fraser bridge of ice and snow. 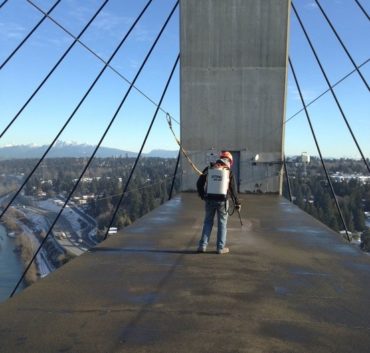 Over the past couple of weeks, chunks of ice were reported to have fallen from Metro Vancouver’s bridges, including the Alex Fraser and Port Mann bridges, resulting in damaged vehicles. On Dec. 6, the Canadian Press said that the Insurance Corporation of British Columbia received at least 40 claims from drivers whose vehicles were damaged. Ten claims were from drivers travelling over the Port Mann bridge between Surrey and Coquitlam, while 30 claims came from motorists going over the Alex Fraser bridge, which spans New Westminster and Delta.

The Ministry of Transportation and Infrastructure said in a press release that “if snow and ice accumulates and engineers determine there is a risk to public safety, the ministry will deploy the helicopter. The rotors will create strong blasts of wind that will blow the snow accumulations off the cables.”

In the last week, provincial engineers have had to make the decision to close the Alex Fraser Bridge two times in the interest of the public’s safety, the release said. Both times, the bridge was closed for more than four hours, delaying motorists and adding congestion to other routes. The temporary measure of using the helicopter “should allow the ministry to reduce the inconvenience caused by a bridge closure, cutting closure times to about two to three hours in duration while the work is being done to clear the snow.”

Related: Crews in B.C. preparing bridges for safety in anticipation of second snowfall

The ministry is working on developing a longer-term solution for the Alex Fraser bridge during winter conditions, the ministry added.

A combination of factors led to the Alex Fraser bridge closures on Saturday, Dec. 10, and on Monday, Dec. 12. The first was a large amount of snow accumulating on the cables. Most years, there is very little snow or the snow blows off without accumulating. The second factor was the cycling of temperatures and wind direction, which increases the likelihood of shedding snow and ice.

On the Port Mann bridge, crews have been performing multiple snow-clearing drops on the bridge’s 288 cables to clear away snow and slush. “These snow-clearing measures have proven effective,” the ministry said in the release. “Traffic has been flowing safely and smoothly on this bridge as a result.”

Metro Vancouver drivers are reminded to expect winter weather conditions on the roads, to drive carefully, to increase following distance to at least four seconds, and to check DriveBC for regular updates on their routes.

The ministry will also continue to keep the driving public informed of any traffic control activities via Twitter, DriveBC and digital message signs.

1 Comment » for B.C. transportation ministry to use helicopter to clear Vancouver-area bridge cables of snow