WILLIAMS LAKE, B.C. – Businesses in British Columbia’s wildfire-ravaged Cariboo region are bracing for more economic hardship after the closure of much of the backcountry during peak tourism season. 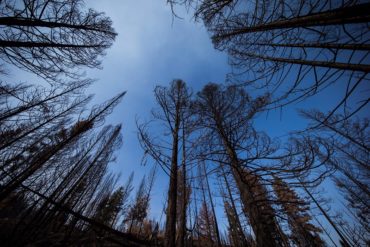 Trees burned by a wildfire are seen in Williams Lake, B.C., on Monday, July 31, 2017. THE CANADIAN PRESS/Darryl Dyck

Executive director Claudia Blair of the Williams Lake Visitor Centre says trails are closed and travellers are limited in what they can do in the popular summer destination.

Blair says businesses have already lost thousands of dollars since the city and surrounding area was evacuated last month due to wildfires and about 40 per cent of residents have not yet returned home.

She says she’s never seen such an economic downturn in 31 years in the area where mills and stores have been forced to close temporarily and the livestock industry has been decimated.

Restrictions to access in the Cariboo fire centre that cover 103,000 square kilometres of Crown lands went into effect last Friday as the province continues to battle the worst fire season since the 1950s.

The ban is intended to maintain safety and prevent any human-caused fires and is expected to remain in place until Sept. 5 but could be lifted earlier if conditions improve.