OTTAWA – The Bank of Canada is warning inflation will stay higher for longer than it previously forecast and signalled that an interest rate hike may be coming sooner than expected.

The central bank said Wednesday it now forecasts that annual inflation rates will continue their upward swing through the rest of year, averaging 4.75 per cent, and be 3.4 per cent next year, up from its previous forecast of 2.4 per cent, before coming back to its two per cent target by 2023.

Driving the rise in prices are global forces that have snarled supply chains, pushed up costs for companies and limited the supply of in-demand goods. The bank expects the worst of supply problems will hit at the end of the year.

Adding to pressures are higher prices for gasoline and natural gas, and a rebound in prices for some in-person services like hotels and flight fares.

Bank of Canada governor Tiff Macklem said higher prices are challenging for Canadians, making it harder for them to cover their bills, but price gains should ease as temporary issues work themselves out.

And if not, he said the bank can and will act to keep inflation under control and bring it back to the central bank’s comfort zone. 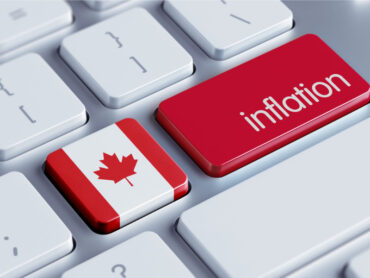 “We understand what our job is. Our job is to make sure that the price increases we’ve seen in many globally traded goods don’t feed through and translate into ongoing inflation and we’re going to do our job,” he told reporters at a late-morning press conference.

“If there are new developments, we start to see that feed through, we will accelerate our actions to bring inflation back to target.”

The bank said the economy has rebounded far enough for it to end its government bond-purchasing program aimed at encouraging lower interest rates, but the recovery is far from complete, which why it kept its key policy rate on hold at 0.25 per cent.

The bond purchases will be rolled back to the point where the bank effectively stops adding stimulus to the economy and rather maintain what is already there.

Macklem said it is “reasonable to expect” the new phase of QE will last at least until the bank raises its policy rate, which could be coming sooner than previously expected.

In its outlook Wednesday, the bank suggests interest rate increases could start as early as the second quarter of 2022, “although the very unusual challenges of reopening an economy make this timing more uncertain than usual.”

TD Bank senior economist Sri Thanabalasingam expects the Bank of Canada will raise rates three times next year, taking its key rate to one per cent by the end of 2022 as the economy improves.

“That being said, we must acknowledge that there is significant uncertainty around the economic outlook right now,” Thanabalasingam wrote in a note. “A resurgence of the pandemic could result in greater stimulus, but if there is a faster-than-expected acceleration in household spending, the Bank could raise rates at a faster clip.”

In its monetary policy report, the Bank of Canada cut its expectations for growth in the Canadian economy this year to 5.1 per cent from its previous forecast of 6.0 per cent. Growth next year is now expected to clock in at 4.3 per cent, down from an earlier forecast for 4.6 per cent.

The central bank warned that economic growth could slow if there is a resurgence of COVID-19 cases, with the bank pointing to evidence that vaccine immunity may wane quicker than previously anticipated.

On the flip side, households may decide to start spending more of their savings sooner if they feel more comfortable on the back of high vaccination rates, which would raise demand and add to inflationary pressures.

Similarly, the outlook warns that temporary factors driving inflation could become even more persistent and drive wage growth that itself fuels an inflationary spiral.

Although the country has recovered the three million jobs lost during the depths of the COVID-19 downturn last year, unemployment remains above pre-pandemic levels among a range of indicators that Macklem said still need to improve.

At the same time, some employers are having a tough time hiring workers, which the bank said could persist as more out-of-work Canadians look to re-skill and leave industries like restaurants and bars that are in need of workers.

So far, wage growth remains at or below pre-pandemic levels, but Macklem said the bank is watching whether that changes as businesses try to attract talent and becomes a driver of inflation.