EDMONTON – Two security guards were injured in an explosion during an overnight armed holdup at a Scotiabank branch in northeast Edmonton.

Police at the scene said the guards – a man and a woman employed by GardaWorld – suffered significant head and facial injuries in the blast that occurred around 2 a.m. Thursday.

They also said the guards were involved in some sort of confrontation with a male armed with a gun, who got away with a bag of money and was still being sought. 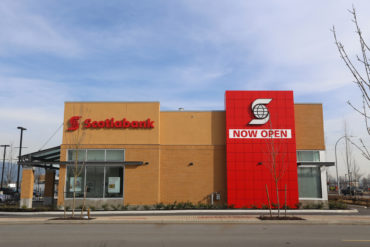 Alberta Health Services said the injuries to the male guard were serious, but he was stable when paramedics took him to hospital. The female guard was also stable.

GardaWorld issued a statement that said the guards were “safe and in good hands.”

“We are providing support to our employees, their families and colleagues at the branch. GardaWorld’s corporate security team is collaborating with the local authorities (in) the investigation.”

Scotiabank said it had been in contact with the branch to ensure people there had support.

“The safety and security of our employees, customers and partners is our top priority and we are taking this matter very seriously.” the bank said in a statement. “Our primary focus is on the well-being of our employees at this time.”

Teamsters Canada, the union that represents the guards, called the attack gutless and cowardly.

The union said the use of an improvised explosive device represents a shift from normal armoured car robbery tactics, which usually involve knives or guns.

“Armoured car crews are professionals who put their lives on the line every day, but they don’t expect to face IEDs when they go to work,” said Al Porter, secretary-treasurer of Local Union 362. “The two guards did everything right last night.”

Karan Singh, a clerk at a convenience store across the street, told CTV Edmonton that he was working at the rear of the store when he heard what sounded like a blast.

“I was sitting back in the room and there were two explosions. After that, one of my customers told me that down the street there were people screaming out there.”

Early-morning commuters were asked to avoid the area while police investigated.

It was the second explosion at an Edmonton bank in about three months. Early on the morning of Sept. 19, police were called to an RBC branch after an improvised explosive device, also known as an IED, went off inside the vestibule.

Police said at the time that two security guards had just arrived when the blast occurred. Both were treated at the scene, then taken to hospital for precautionary reasons.

Investigators treated the explosion as an attempted robbery, but no money was stolen.

There have been at least two other dramatic heists in the city.

In July 2016, a suspect was shot and killed during a botched robbery in which two thieves used pepper spray at a TD Canada Trust. The other robber got away.

In June 2012, an overnight crew of five armed guards employed by security company G4S was reloading ATM machines on the University of Alberta campus when one of the guards opened fire. Three of his co-workers were killed and the fourth was seriously injured.

Travis Baumgartner fled with thousands of dollars in cash, but was arrested a day later while trying to enter the United States at a border crossing in British Columbia. He pleaded guilty and was sentenced to life in prison with no chance of parole for 40 years.

GardaWorld is the largest privately owned security services company in the world with some 45,000 employees and clients.