The BC Wildfire Service has reported that its firefighters are making “good progress” on the two dozen small lightning-caused wildfires that started in the southeast part of the province over the past week. 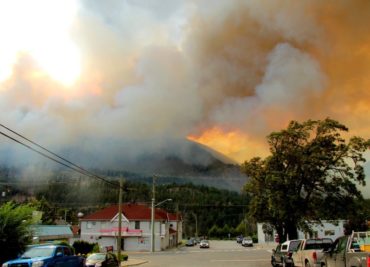 The South Spencer Road fire near Lytton is currently about 30% contained. Photo: @BCGovFireInfo.

Since Aug. 29, BC Wildfire Service crews have responded to 23 wildfires in the Southeast Fire Centre, the Ministry of Forests, Lands and Natural Resource Operations said in a press release on Thursday. Many of the fires are still “highly visible” in the area, the ministry reported, but none is currently threatening any structures or communities.

There are three separate fires burning about 12 kilometres south of Boswell in the Sanca area east of Kootenay Lake that are either in the mop-up or patrol stages, the release said, with the exception of the wildfire burning closest to Sanca Creek. Airtankers, a helicopter and 16 ground crews are currently working on this 2.2-hectare fire.

Other fires being worked on include:

Since April 1, 2016, the BC Wildfire Service has responded to 181 wildfires in the Southeast Fire Centre, 51 of which were human-caused, the ministry reported.

The fire danger rating in most of the Southeast Fire Centre is currently “high,” with some areas in the Arrow, Kootenay Lake and Cranbrook fire zones rated “extreme.” The Southeast Fire Centre extends from the U.S. border in the south to the Mica Dam in the north and from the Okanagan Highlands and Monashee Mountains in the west to the B.C.-Alberta border in the east.

There is currently one “wildfire of note,” the South Spencer Road fire two kilometres south of Lytton. The estimated 500-hectare fire, discovered on Wednesday, was 30% contained as of Thursday night, the BC Wildfire Service reported. “The fire continues to burn away from structures and sprinkler protection units have been mobilized on properties in the area,” the organization said. “Crews are suppressing the southern flank, closest to critical infrastructure and the community of Lytton.”