Following Canada’s costliest natural disaster, Fort McMurray may be more resilient in the short- and medium-term, but there needs to be an avoidance of “event amnesia,” a speaker suggested earlier this week at the National Insurance Conference of Canada (NICC). 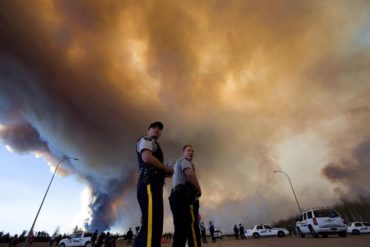 Police officers direct traffic under a cloud of smoke from a wildfire in Fort McMurray, Alta., on Friday, May 6, 2016. The ferocious wildfire that forced nearly 90,000 to flee Canada’s oilsands region and reduced thousands of homes to rubble has been picked as the top news story of 2016 in an annual survey of newsrooms across Canada by The Canadian Press. THE CANADIAN PRESS/Jason Franson

Shane Schreiber, managing director of Alberta Emergency Management Agency, described the phenomenon in emergency management as “the further you get away from an event, the less catastrophic it seems and the more bad habits you allow yourself to slide back into.”

“So I take it as a bit of a personal challenge to me and my organization to try and learn as much as we can and don’t suffer from event amnesia and start to slide backwards,” he said on Monday during a session titled Did We Get it Right? A Realistic View of the Industry’s Performance in Fort McMurray.

Schreiber said that in the days after the fire, “everybody wanted their backyard cleared of trees,” but in the weeks that followed, “people started saying, ‘You know, how about you cut somebody else’s trees down because I like mine.’ So I think we’re going to have to work hard to avoid event amnesia and maintain that higher level of resilience that being in contact with an event creates.”

Erin O’Neill, operations manager of the Regional Municipality of Wood Buffalo’s recovery task force, suggested people in the municipality, which includes Fort McMurray, are more resilient having gone through the fire, which cost an estimated $3.7 billion in insured losses. “As a municipality, we have gotten some of it right,” she told conference attendees, using the example of putting in different landscaping requirements. “But did we use all non-combustible materials and are all our houses FireSmart and are they built farther apart?” she asked. “No. The building code didn’t change. We heard it was going to be anywhere from a 10 to 40% increase if somebody wanted to put in all those new building materials” such as hardy boards, O’Neill said. 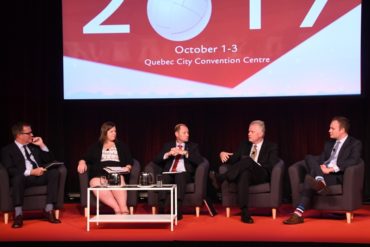 FireSmart principles are measures homeowners can take to reduce the damage from wildfires, and relate to things like roofing material and design; siding and vents; gutters and eaves; decks; fencing; and landscaping.

Another speaker on the panel, Mike Van Elsberg, deputy senior vice president of claims west for Intact Financial Corporation, agreed that “absolutely we need to look at how we build better, more resilient communities so that these things don’t happen again.” The key, though, Van Elsberg suggested, is to not have the discussion right after the loss, but rather “to make sure it’s embedded in the building code so that when these events happen, the rulebook is ready for us. Don’t have that discussion when the customer is held hostage while we’re trying to sort this out. Customers who are sitting with their young kids in a hotel somewhere are not interested in that at that point.”

Panel moderator Bill Adams, vice president, western & pacific with the Insurance Bureau of Canada (IBC) told delegates that, generally speaking, the industry needs to do better collectively in making the consumer aware of what they are purchasing before they purchase it “to make certain their expectations are much more closely aligned to in fact the coverages that are in their policy. Until we do that, there is going to continue to be that sense of revictimization,” he said. (Earlier in the session, IBC showed a video in which customers described their experience with the claims process and insurance industry.) “The quality of compassion shown by insurers and their representatives came through as the single most important driver in their overall level of satisfaction with their claims process,” Adams said. “Unfortunately, some people spoke of feeling revictimized by the claims process.”

For Reid Fiest, Alberta correspondent with Global News, the “biggest thing that we heard and that I heard from people as they went through the process is it was just disconnected.”

NICC took place in Quebec City from Oct. 1 to 3.