OTTAWA – The effects of the enormous Alberta wildfire on the ever-crucial oil sector have prompted forecasters to trim their 2016 economic growth predictions for the entire country.

Experts, including those from several big banks, have shaved their outlooks in recent days following the huge blaze that tore through Fort McMurray – the heart of oil country. 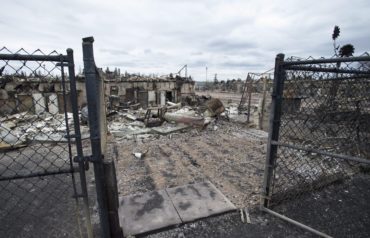 The burnout remains of a home in the Abasands neighbourhood is seen during a media tour of the fire-damaged city of Fort McMurray, Alta., on Monday, May 9, 2016. THE CANADIAN PRESS/Jonathan Hayward

The emergency forced nearby oilsands facilities to shut down last week, but some have begun to restart their operations. More are expected to get back to work over the coming days.

Long: 400 workers up in Suncor now, trying to get facility running as quickly as possible. #ymmfire #ymm

But even temporary closures in the economically important industry are expected to have an impact on the nationwide real gross domestic product.

In many cases, the updated real GDP projections also reflect disappointing economic data releases in recent weeks for trade and the labour force.

Since the fire, TD knocked its 2016 real GDP projection down to 1.6 per cent from 1.9 per cent – 0.2 percentage points of which it attributed to the wildfire.

BMO clipped its prediction to 1.6 per cent from 1.8 per cent – evenly dividing the blame for the drop between the poor economic numbers and the disaster.

CIBC lowered its outlook from 1.6 per cent to 1.5 due entirely to the fire.

Getting down to work in Wednesday caucus – discussing the #FortMacFire and issues from across the country. pic.twitter.com/OqcpP5zVcJ

At this early stage, however, economists stressed that their predictions remain in flux as officials and companies gain a better understanding of the situation.

“Anyone who is doing this today is still making some big guesses about how the oil facilities and the rest of the town are going to come back,” CIBC chief economist Avery Shenfeld said.

Forecasters expect the wildfire to contribute to flat growth or even a contraction in the second quarter of the year. They now expect the economy to rebound with stronger growth in the third quarter.

BMO chief economist Doug Porter said losing activity early in a given year, even if it’s regained later on, usually means the economy will still suffer a slight loss for the year as a whole.

The wildfire, which has spread across about 2,300 square kilometres and continues to burn, destroyed about 10 per cent of Fort McMurray’s 25,000 buildings. More than 80,000 people were evacuated from the northern Alberta community.

“Thank goodness most of the city was spared – the vast majority of it – and fortunately most of the (oilsands) facilities were, at the end of the day, unaffected,” Porter said.

“It certainly could have been much worse.”

Still, the disaster and the production shutdowns were severe enough to compound ongoing troubles in a province that has been Canada’s economic engine for years.

Before the fire, the provincial and federal treasuries were already under intense fiscal pressure from still-low oil prices that started to plummet nearly two years ago.

Both governments are expected to allocate large sums to cover the costs of things like firefighting and reconstruction.

For example, Ottawa spent more than $1.3 billion to respond to the massive 2013 floods in southern Alberta and southeastern British Columbia, according to a February report by the parliamentary budget officer.

Porter said the federal government should have more than enough cushion with its much-debated, $6-billion annual risk adjustment that it included in its March budget.

The government has said it included the contingency padding, which was much-larger than usual, in case the country’s economic performance turns out to be weaker than experts have predicted.

Critics have said the Liberals made the adjustment bigger than necessary to allow them to reap the political benefits of beating expectations.

But even with the unexpected wildfire costs, Porter still expects the Ottawa’s 2016-17 shortfall to be smaller than the projection of nearly $30 billion outlined in the budget.

“I would say it’s early days yet to talk about the fiscal implications, although I suspect the federal government will contribute heavily,” Porter said.

“I don’t dare put a figure on it at this point.”

Our first adjuster arrives in #FortMcMurray to inspect claims via CC-130J Hercules from @CanadianForces #YMMFire pic.twitter.com/lwhE4uTGGT

Insurance assessors are going into Fort McMurray today. Larivee says it will take about five days to assess all homes #ymmfire #ymm

400 restoration workers on ground as well. A big priority is the hospital where there was some damage from smoke and water #cbc #ymmfire.

Scott Long with Emerg Ops: No significant (fire) starts in #ymm in the last 48 hours, but some smouldering in basements #ymmfire

Scott Long from Alberta Emergency Management says re-entry plan is expected to be out within the next two weeks. #ymmfire

Q if burn scar around Fort McMurray protects it frm more fire. Morrison: Yes, most veg burned. Not all – working on that risk. #ymm #ymmfire

Officials: fire continues to spread east and away from community #cbc #ymmfire.

Latest update on #ymmfire from Muni Affairs Min. Danielle Larivee: $7M worth of relief handed out to 6,000 people yesterday.

Chad Morrison with Alberta Wildfire says hot spots continue to flare up, but blaze is being held at 241,000 hectares #ymmfire #ymm

Chad Morrison with @AlbertaWildfire says they continue to hold the line. Many hotspots remain around the city. #ymmfire

Long: Still downed power lines, still an "awful lot of work that needs to be done" before ppl can be brought back safely. #ymm #ymmfire

Abandoned vehicles on 63 will be towed to an impound yard, when it is safe to do so they will be returned with a full tank of gas. #ymmfire

Here's an edit of my coverage of the Fort McMurray Wildfires – https://t.co/NlYDeYNKRH pic.twitter.com/jUr08ejmja