If you think the most expensive floods in Canadian history were big, you haven’t seen anything yet. “The manifestation of climate change and extreme weather events is still yet to come,” said Blair Feltmate, head of the Intact Centre on Climate Adaptation at the University of Waterloo, Monday.

“I personally do not believe the Calgary floods, the Toronto floods, the Burlington floods – those are not the big floods,” Feltmate said at a panel discussion hosted by the Economic Club of Canada in Toronto. 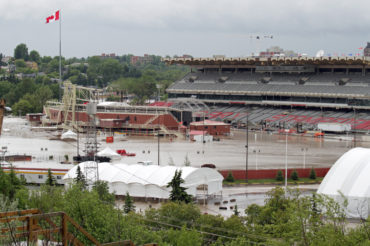 By the Calgary and Toronto floods in 2013, he was referring to Canada’s third- and fourth-largest disasters respectively. Burlington, Ont residents experienced flooding in early August of 2014 when about 200 mm of rain hit that city, located immediately northeast of Hamilton.

“Those are a prelude to the bigger floods that are coming,” Feltmate said during the panel, titled Climate Change and the Financial Sector. The event, held at the Royal York Hotel at the south end of Toronto’s financial district, was moderated by Don Forgeron, president and CEO of the Insurance Bureau of Canada.

In June 2013, heavy rains caused widespread flooding in southern Alberta. That resulted in the evacuation of the entire town of High River and the inundation of much of Calgary’s central business district, including the Saddledome, which serves as home ice for the Calgary Flames.

Industry-wide insured losses were about $1.7 billion, making it the third most expensive natural disaster in Canadian history after the 2016 Alberta wildfire and the 1998 ice storm.

Flood is “one of the biggest natural disaster risks” facing Canadian consumers today, Forgeron warned Monday. Climate change “is affecting Canadians now,” Forgeron added. “We are feeling its affects across the country and on the bottom lines of many businesses and organizations.”