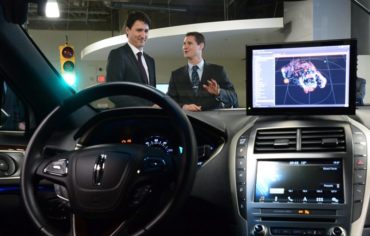 John Chen, executive chairman and CEO of BlackBerry Limited and Canadian Prime Minister Justin Trudeau unveiled AVIC on Monday. Housed within the BlackBerry QNX facility in Ottawa, the centre will “accelerate the realization of connected and self-driving vehicles by developing production-ready software independently and in collaboration with partners in the private and public sector,” BlackBerry said in a press release.

As part of this initiative, BlackBerry QNX plans to recruit and hire local software engineers to work on ongoing and emerging engineering projects for connected and autonomous cars.

The Ministry of Transportation of Ontario recently approved BlackBerry QNX to test autonomous vehicles on Ontario roads as part of a pilot program, the release noted. One of the centre’s first projects will be supporting this pilot as well as BlackBerry QNX’s work with the University of Waterloo, PolySync and Renesas Electronics to build an autonomous concept vehicle.

“Autonomous vehicles require software that is extremely sophisticated and highly secure,” Chen said in the release. “Our innovation track record in mobile security and our demonstrated leadership in automotive software make us ideally suited to dominate the market for embedded intelligence in the cars of the future. This centre will create great middle-class jobs for Canadians, new opportunities for recent university graduates and further position Canada as a global hub for innovation.” 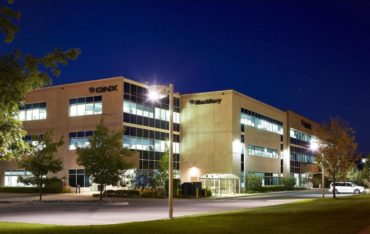 BlackBerry QNX has been supplying embedded software to the automotive industry for over ten years and can be found in more than 60 million vehicles today, the release noted. Millions of telematics-equipped cars on the road are using BlackBerry’s Certicom security technology for communication authentication and authorization. BlackBerry QNX is extending its platform expertise into ADAS (advanced driver assist systems), CVAV (connected vehicle and autonomous vehicle) systems and secure “over the air software update” services.

According to BlackBerry, experts have predicted that 50% of all cars will connect to the cloud by 2020, and the wide range of ‘connected things’ could exceed 20 billion. “In the coming hyper-connected world, cars will soon carry one of the highest concentrations of Internet of Things (IoT) edge nodes and sensors, generating a vast amount of valuable and actionable data. Anticipating this shift, BlackBerry is investing in key technologies and building a product portfolio that will provide the embedded intelligence that powers the core electronics of connected and autonomous cars.”

Early results from the centre will be unveiled in Las Vegas at the Consumer Electronics Show in January 2017.

Based in Waterloo, Ont., BlackBerry is a mobile-native security software and services company dedicated to securing the enterprise of things. The company was founded in 1984 and operates in North America, Europe, Asia, Middle East, Latin America and Africa.

Honoured to have @JustinTrudeau and @JohnChen here to announce the BlackBerry QNX Automotive Innovation Centre pic.twitter.com/W7Z8R0xX5p

Celebrating the launch of the @BlackBerry @QNX_Auto innovation centre, which will create well-paying jobs for middle class Canadians. pic.twitter.com/CJpYVfezVy

“It is a great day for a proudly Canadian company and its subsidiaries. Congratulations to #BlackBerry and QNX.” pic.twitter.com/0xJAXVfQ7j