The complete failure of an already-cracked rail led to the January 2015 derailment of a Canadian Pacific Railway (CP) freight train carrying dangerous goods near Nipigon, Ont., the Transportation Safety Board of Canada (TSB) said in an investigation report released on Wednesday. 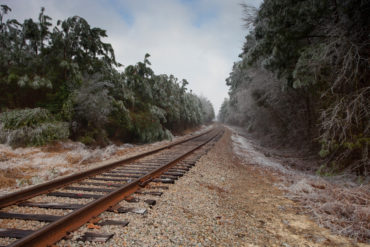 On Jan. 13, 2015, a CP freight train was proceeding eastward about 34 kilometres east of Nipigon when 21 cars derailed, including seven dangerous goods tank cars loaded with propane, TSB said in its report. As a result of the derailment, one tank car lost its entire load of propane and another tank car loaded with propane released product. One crew member also sustained minor inhalation injuries due to exposure to propane.

“Although five of the six tank cars generally performed as intended, this derailment demonstrated that even a DOT-112 pressure tank car with improved design can be vulnerable to releasing product when exposed to high impact forces and sharp impact punctures,” TSB said in a statement.

The TSB investigation determined that “rail within a joint failed catastrophically” as the train passed over it, leading to the derailment of the 11th to 31st cars. “The rail failure originated at a bolt hole crack within a joint in the south rail, which had propagated diagonally downward through the base of the rail likely due to one or more elevated wheel impacts that occurred prior to the arrival of the occurrence train,” the statement said.

Credit: Transportation Safety Board of Canada.

Despite regular inspections, the rail defect was not detected because the bolt hole crack and the rail base fracture were behind the joint bars, making visual detection difficult, especially in the winter months when snow covered the rail base. The cold temperature at the time of the accident also made the rail more susceptible to brittle failure, TSB added.

Despite the conductor’s repeated exposure to the propane, medical assistance was not specifically requested until two hours later. The investigation found that CP training, procedures and guidelines were insufficient to protect the conductor from the hazards associated with the derailment and release of a large volume of propane while conducting the site assessment.

A number of deficiencies posed additional risk in this occurrence, particularly with respect to the lack of information available to crews and rail traffic controllers about the risk of ignition and the health hazards posed by products involved in a derailment, the TSB concluded.