How brokerages should handle employees’ use of social media

Negative public reaction to some high-profile Twitter and Instagram posts raises the question of whether insurance brokerage owners should monitor the personal social media accounts of their workers.

“As part of our hiring – if [a prospective employee’s] Facebook page was public, we would go in and have a look at it,” noted Young, principal and owner of Lundgren and Young Insurance Ltd., in an interview Tuesday.

What if a brokerage employee posts something controversial but does not specifically identify himself or herself as an employee? 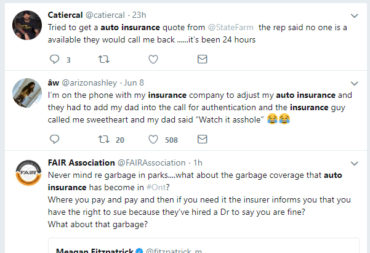 “If someone puts political posts out there about Donald Trump and it’s their personal opinion and it’s held out as such, that’s one thing,” said Young, a past president of the Insurance Brokers Association of Alberta. “I think if they were to post a comment about a poor experience with a customer, and they are lambasting in public a customer or an insurance company or even a colleague in the same industry – any of these could be cause for concern,” Young said.

Several employers outside the insurance industry have come under fire for social media posts made by workers off the job.

In late May, television network ABC cancelled “Roseanne” in the wake of a racist tweet targetting a former advisor to former President Barack Obama. The Associated Press quoted an ABC official as stating that Roseanne Barr’s tweet was “abhorrent, repugnant and inconsistent with [ABC’s] values.”

On this side of the border, published reports the first week of June indicated a Toronto-area school board is investigating one Brampton, Ont. supply teacher for a post allegedly made on Instagram.

Global News reported June 4 that a photo of a young child – purportedly a pupil with the Peel District School Board –  was posted to Instagram next to a photo of a movie character. A Twitter user complained to the board that the person making the Instagram post was making fun of the child and identifying the school’s location.

For insurance brokers, it is “absolutely necessary” for a brokerage to have a written policy on social media use, Young said, commenting in general and not on either Roseanne Barr or the Peel District School board investigation.

A social media use policy should be in an employee handbook that each employee gets the first day on the job, Young suggested.

Lundgren and Young has a policy prohibiting negative comments about customers or colleagues outside the workplace – including but not limited to comments social media sites, Young suggested.

Corporate social media policies should “advise employees that their use of social media may be monitored,” wrote Catherine Coulter, an Ottawa-based employment lawyer for Dentons, on her firm’s website. Coulter further recommends that workplace policies stipulate that while blogging, workers should “make it clear that the views expressed are not necessarily those of the organization,” unless the organization requires blog entries to be approved prior to posting,.

Employers’ social media policies should “remind employees that their posts on social media sites may reflect upon the employer” wrote Toronto employment lawyer Joseph Cohen-Lyons in an earlier article. Workplace policies should “be very clear about conduct that is acceptable and equally clear about conduct that is considered unacceptable,” Cohen-Lyons added in the article, which was posted to the website of law firm Hicks Morley Hamilton Stewart Storie LLP.