Insurance firms writing an all risks policy for an office building under construction in Edmonton must cover the multi-million dollar cost of replacing windows damaged by cleaning, despite an exclusion for “the cost of making good faulty workmanship,” the Supreme Court of Canada has ruled. 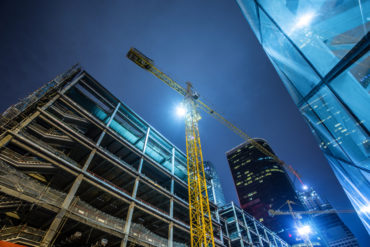 In its ruling released Thursday in Ledcor Construction Ltd. v. Northbridge Indemnity Insurance Co., Canada’s highest court also suggested that in legal disputes over standard form contracts, interpretation is often a question of law subject to review for correctness, rather than a question of mixed law and fact.

The policy insured “all risks of direct physical loss or damage.” One exclusion was for “the cost of making good faulty workmanship, construction materials or design unless physical damage not otherwise excluded by this policy results, in which event this policy shall insure such resulting damage.”

The Supreme Court of Canada found that the insurers “did not undertake to cover the ‘cost of making good faulty workmanship’, but they did promise to cover ‘physical damage [that] results’ from that ‘faulty workmanship'” Mr. Justice Richard Wagner wrote on behalf of six of the seven judges hearing the appeal from Ledcor and Station Lands.

The Sept. 15 ruling overturns a decision in favour of the insurers released March 27, 2015 by the Alberta Court of Appeal. A 2013 Court of Queen’s Bench of Alberta ruling against the insurers is now restored.

Court records indicate that as the EPCOR project was nearing completion during the summer of 2001, Bristol Cleaning was hired to clean windows, which were then damaged and had to be replaced.

“At the time construction neared completion, concrete splatter, paint specs, and other construction dirt remained on the windows,” the Alberta Court of Appeal noted. Bristol used “dull or inappropriate blades to scrape off the dirt,” and did not properly clean the blades, the Alberta Court of Appeal added. “It also used a non uni-directional’ cleaning method, and failed to follow the manufacturer’s cleaning instructions.”

The replacement cost of the windows was estimated at $2.5 million, wrote Justice Wagner of the Supreme Court of Canada.

In 2013, Mr. Justice Terry Clackson of the Court of Queen’s Bench of Alberta ruled the policy was ambiguous and the cost of replacing the windows is covered.

“Because the base coverage is for ‘physical loss’, the exclusion ‘cost of making good faulty workmanship’ must exclude some physical loss, or the exclusion would be redundant,” the Alberta Court of Appeal wrote. “The clause then continues with the proviso that ‘resulting damage’ that is ‘physical damage not otherwise excluded’ is nevertheless covered. The key is to determine the dividing line between the physical loss that is excluded because it is the ‘cost of making good’ and that which is covered because it is ‘resulting damage.'”

The province’s appeal court ruled that the damage to the windows was foreseeable and “presumptively not within the scope of the insurance policy” because the builder’s risk policy “is not a construction warranty agreement.”

The Supreme Court of Canada disagreed, ruling that the policy “does not inappropriately spread risk, nor would it allow or encourage contractors to perform their work improperly or negligently,” Justice Wagner wrote. “Importantly, Bristol is precluded from receiving initial payment for its faulty work and then receiving further additional payment to repair or replace its faulty work.”

Among the cases cited were the 2010 Supreme Court of Canada ruling in Progressive Homes Ltd. v. Lombard General Insurance Co. of Canada.

When interpreting insurance contracts, “the primary interpretive principle is that when the language of the policy is unambiguous, the court should give effect to clear language, reading the contract as a whole,” Mr. Justice Marshall Rothstein wrote in Progressive Homes.  When the policy language is ambiguous, a court “should prefer interpretations that are consistent with the reasonable expectations of the parties ….. so long as such an interpretation can be supported by the text of the policy,” Justice Rothstein added. Where general rules of contract construction “fail to resolve the ambiguity, courts will construe the policy contra proferentem — against the insurer.”

In Northbridge vs. Ledcor, “the parties’ reasonable expectations, informed largely by the purpose of builders’ risk policies, point to the faulty workmanship exclusion serving to exclude from coverage only the cost of redoing the faulty work,” Justice Wagner wrote. “This interpretation aligns with commercial realities and is consistent with prior jurisprudence.

Another case cited in Ledcor was the Supreme Court of Canada’s 2014 ruling in Sattva Capital Corp. v. Creston Moly Corp. That dispute was not over an insurance contract.

Creston Moly, formerly Georgia Ventures Inc., had an opportunity to acquire a molybdenum mining property in Mexico and agreed to pay a finder’s fee to Sattva Capital. That fee was to be paid in Creston shares and the parties disagreed over “which date should be used to determine the price of Creston shares and thus the number of shares to which Sattva is entitled.”

An arbitrator and the B.C. Supreme Court ruled in favour of Sattva. That ruling was overturned on appeal but the Supreme Court of Canada restored the arbitrator’s ruling.

“Historically, determining the legal rights and obligations of the parties under a written contract was considered a question of law,” Justice Rothstein wrote in 2014 in Sattva. “This rule originated in England at a time when there were frequent civil jury trials and widespread illiteracy. Under those circumstances, the interpretation of written documents had to be considered questions of law because only the judge could be assured to be literate and therefore capable of reading the contract.”

Today, Justice Rothstein continued, “the interpretation of contracts has evolved towards a practical, common-sense approach not dominated by technical rules of construction,” and the “overriding concern is to determine the intent of the parties and the scope of their understanding.”

More News
Related
Lawyer explains why some federally-regulated employees cannot be dismissed without cause
Exclusion clause for ‘conversion’ in comprehensive auto policy ‘does not come close’ to being easily intelligible: Court
Supreme Court of Canada will not hear appeal from insureds seeking replacement cost instead of actual cash value in fire claim
Manitoba Public Insurance announces higher third party auto liability coverage, up to $10 million

3 Comments » for Builder’s risk policy must cover windows damaged by cleaning on building under construction: Supreme Court of Canada