Business interruption (BI) is the leading cause of losses for companies, multinational organizations and non-governmental organizations (NGOs) that operate outside the United States, according to a study released on Thursday by international insurance broker Clements Worldwide. 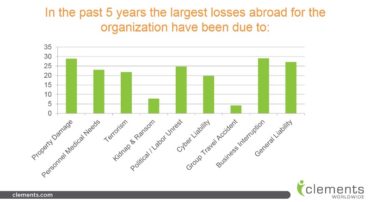 The Clements Worldwide Risk Index (CWRI) for summer/fall 2016 found that property damage and general liability are the close second and third largest sources of financial losses among respondents. When asked “in the past five years, the largest losses abroad for the organization have been due to,” more than 25% of respondents cited each BI, property damage and general liability. And one-third of survey respondents listed all three as loss-generating risks over the past six months.

The 409 respondents are responsible for global risk management to their multinational companies and NGOs, Clements Worldwide said in a press release.

In the face of these risks, 35% of organizations indicated they may delay global expansion, up from 27% in the winter/spring 2016 edition of the CWRI.

“We are aware of the concerns regarding global expansion and are working with an increasing number of companies to access the right coverages abroad based on where they working and their operational focus,” said Chris Beck, president of Clements Worldwide, in the release. “As organizations are reconsidering their coverage, they are coming to terms with the fact that man-made risks like political violence and cyberattacks are as important as environmental risks like weather and catastrophic perils in terms of their potential threat to global operations in a way that threatens sustained growth.” 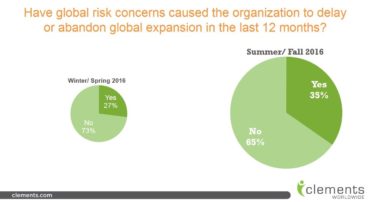 The survey also highlighted increased risks of political violence and terrorism, with 25% of respondents citing terrorism as their top concern in the most recent edition of the index. The top concern among all respondents was fears related to lack of protections against cyberattacks and subsequent cyber liability, which topped the list of concerns at 26%.

In addition to a global risk overview, the summer/fall 2016 edition provides new analysis of the risks faced by three key global sectors: NGOs, government agencies and contractors, and international schools. While NGOs and international schools reported findings consistent with the global results of this edition, the top losses reported by respondents affiliated with government agencies and contractors showed “troubling” differences, Clements Worldwide said in the release. Forty-three per cent of these respondents identified terrorism as the top source of losses. Cyber liability was second at 36% and political/labor unrest followed closely behind at 33%. In line with previous surveys, terrorism still remains a top concern as reported by 39% of these respondents versus 25% of overall respondents, the release said.

“No single organization can stop the increased threats to global operations,” added Beck. “The Clements Worldwide Risk Index does make clear that organizations can do more to reduce the risks posed by particular threats like political violence, kidnap and ransom, and cyber threats. Creative and proactive risk management, including the right insurance, is a critical factor in the continued growth of multinational organizations and the entire global economy.”

Clements Worldwide is an insurance provider for expatriates and international organizations. Founded in 1947, the broker offers international car, property, term life, disability, health, specialty, and high-risk insurance in over 170 countries.