Over more than two decades, the Canadian fashion designer built her luxury clothing brand debt-free by reinvesting her earnings back into the business.

“I was raised with old-fashioned values,” she said from her home in Falmouth, a village in rural Nova Scotia. “You dig your heels in and you just get the hard work done. I haven’t had to rely on government funding for anything.”

But pandemic restrictions upended Drader-Murphy’s retail business, repeatedly forcing the closure of her five stores, cutting off most of her income and pushing her into debt.

It’s a situation that has already forced many businesses in Canada to permanently close.

Now business groups are warning that many more may not survive the summer as federal aid begins to phase out before the economy fully reopens.

Eliminating wage and rent subsidies before businesses are fully operational could unleash a wave of closures in the pandemic’s final days, they say. 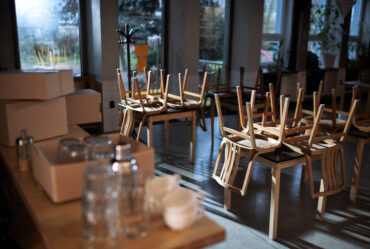 “Many businesses have had no revenue for months and they’ve taken on huge amounts of debt,” said Corinne Pohlmann, senior vice-president of national affairs for the Canadian Federation of Independent Business.

“Cutting back on subsidies prematurely when businesses are still closed or severely restricted is a recipe for disaster.”

The latest round of lockdowns across the country have been some of the strictest yet, hitting non-essential retailers along with the hospitality and events industries particularly hard.

While restrictions are expected to begin easing in the coming weeks, Pohlmann said hiring and training staff, getting new inventory in stock and attracting customers back “doesn’t happen overnight.”

“Businesses are just trying to get to the other side of these restrictions,” she said. “But with lockdowns or strict measures still in place and many businesses deep in debt, many just won’t survive without subsidies.”

The federal government has provided businesses with wage and rent subsidies and lockdown support during the pandemic. These measures have been extended to September but they’ll begin steadily phasing out next month.

Katherine Cuplinskas, a spokeswoman for Finance Minister Chrystia Freeland, said in an email that Ottawa will continue to support small businesses through a new hiring program, business financing program and other measures.

While Pohlmann said she welcomes the hiring incentive, she said the wage and rent subsidies may still be required by some businesses past September given ongoing delays with provincial reopening plans.

Chair Decor president Liz Clark agrees that her company will likely need more time to get up and running.

The Toronto-area company rents out chairs, linens and other accessories for events and has recorded a 97 per cent drop in revenues due to the pandemic.

With the events industry forecasting a slow and bumpy recovery, she said the federal aid will likely be phased out before the Woodbridge, Ont., business is back up and running.

“We’re not going to see a return to business before the subsidies start decreasing,” Clark said. “All of our summer weddings are cancelled or postponed at this point. If you were to look at our books right now, you would say there’s no revenue coming down the line because there are no events scheduled to go ahead yet.”

Diane J. Brisebois, president and CEO of the Retail Council of Canada, said smaller merchants and non-essential retailers are being left behind.

“I think people would be shocked at the number of businesses that may not make it in the final days of the pandemic if more isn’t done,” she said.

“There needs to be more attention paid to those retail businesses that have not been able to open or operate fully. They’re suffering and they’re in debt.”

For designer and entrepreneur Drader-Murphy, she said her losses continue to add up.

While she shifted early in the pandemic to making masks – the designer has a background in technical industrial apparel and safety gear – that market dried up quickly. But those sales bolstered her revenues just long enough to make her ineligible for the first wave of subsidies.

“We had five weeks of making masks that made up for the loss of all of our stores being closed,” Drader-Murphy said. “Then all of a sudden those sales slowed and even though my stores were still closed, I had to pay 100 per cent of my commercial rent because I didn’t qualify for the first round of subsidies.”

Then one of her last remaining income streams was abruptly cut off when the Nova Scotia government banned travel between communities in the province earlier this spring. The decision forced her to refund months of bookings at Willow Vale Estates, a boutique vacation rental she operates in Falmouth that normally attracts international guests but has focused on locals during the pandemic.

“That was the only thing keeping us going,” Drader-Murphy said. “To have every industry in my household wiped out has been disastrous.”

With cancelled bookings and closed stores, bills have piled up.

But a provincial decision to allow non-essential retailers to open at 25 per cent capacity starting Wednesday will help, she said.

“It will mean I’m getting less in debt than I was when we were completely closed,” Drader-Murphy said. “It’s not very sustainable but I’m happy that we’re at least moving in that direction.”

She added: “It gives us a fighting chance.”