TORONTO – Ontario businesses were hit with another round of pandemic-related closures and capacity restrictions Wednesday, but details of financial support remained scant as the measures took effect.

Restaurants, gyms, cinemas and other indoor venues were forced to close while retail stores and personal care services were limited to half capacity in a government bid to rein in the rapidly spreading Omicron virus variant that’s caused infections and hospitalizations to skyrocket.

It’s a familiar routine now almost two years into the pandemic, particularly in Ontario where restrictions have been reintroduced repeatedly during virus surges. But the lack of immediate support this time around is “rage-inducing” for struggling business owners, said the president of the Canadian Federation of Independent Business.

“It’s appalling that the provincial government has not announced immediate relief,” Dan Kelly, president of the organization, said in an interview Wednesday.

“Businesses are locked down today with hints of programs that have yet to be even designed.” 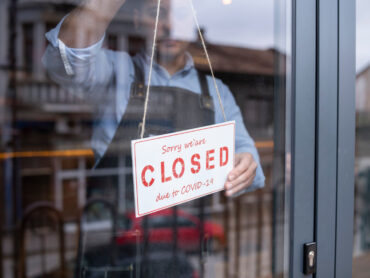 “Obviously we’re dealing with refunds and frustrations,” he said in a telephone interview. “Understandably so. A lot of people feel like there is no end to this.”

Saiyan said he’s focused on keeping the business running and hopeful that the shutdown will end after the scheduled three weeks. But he said current supports don’t even fully cover the rent.

“I wish the government reacted sooner,” he said. “I think after two years, they should already have just a better idea how fast things can go wrong.”

The Progressive Conservative government has announced $7.5 billion for a six-month interest-free period for businesses to make payments on provincial taxes.

It has also promised an energy and property tax rebate of up to 100 per cent of for businesses subject to closures and 50 per cent for those under capacity limits, but the list of businesses eligible to apply won’t be available until an unspecified date later this month.

A spokeswoman for Finance Minister Peter Bethlenfalvy said Monday that the province is also “exploring other options” for business supports, including grants for those affected by the latest shutdown measures.

“This is Minister Bethlenfalvy’s number one focus,” Emily Hogeveensaid in an emailed statement. “More details will be released in the near future.”

The province has also called on the federal government to let businesses defer HST payments and bring in more worker supports.

Kelly said he too would like to see more federal supports, and said he also wants the province bring back a program that offered business grants of $10,000 and $20,000. He said he’d also like to see the program expanded to include other businesses that weren’t eligible in the first round but took significant financial hits due to the shutdowns.

That program came under scrutiny in a recent report from the province’s auditor general, who found hundreds of millions of dollars were doled out to ineligible businesses while others in need of support were excluded, due to flaws in the rushed program design.

Kelly said speed should take priority over perfection as many businesses are running out of financial and creative wiggle room to keep running two years into the pandemic.

“Frankly, time is of the essence,” he said. “Our choices are getting cash out to business owners, recognizing that a few may make get it that don’t qualify, or letting swaths of the Ontario business community permanently fail.”

Andrea Horwath, leader of the New Democrats, called for immediate business grants to cover payroll and rent, deferred HST payments and a commercial eviction ban to support small and medium-sized businesses through the latest round of restrictions.

She also argued that problems with the earlier grant program should already have been sorted out to allow for swift support when new public health measures were introduced.

“They could have actually learned their lessons from the previous program,” she said. “They didn’t do that.”

Toronto restaurant owner Ginger Robertson became emotional at the NDP news conference, where she discussed the shutdown’s impact on her staff and called for immediate financial support.

“Having to tell your staff for the fourth time that they don’t have work is the hardest thing I’ve ever had to do, and nothing that any of us should have to do at this point,” she said.

The province has said the latest restrictions will last at least 21 days, to be reassessed based on public health indicators at the time.

Premier Doug Ford announced the latest measures – which also include provincewide school closures and halting all scheduled surgeries considered non-urgent – earlier this week, citing fears that hospitals could soon be overwhelmed by virus patients with few available staff to care for them.

Ontario reported 2,081 people in the hospital with COVID-19 and 288 patients in intensive care Wednesday, up from 1,290 people in hospital the previous day, though Tuesday’s numbers may have been an undercount due to delayed reporting after the statutory holiday weekend.

Health Minister Christine Elliott said 202 patients in intensive care as of Wednesday were not vaccinated or have an unknown vaccination status and 86 people are fully vaccinated.

There were 11,582 new COVID-19 cases reported Wednesday but Public Health Ontario has noted that the true number is likely higher due to policy changes making testing less accessible.