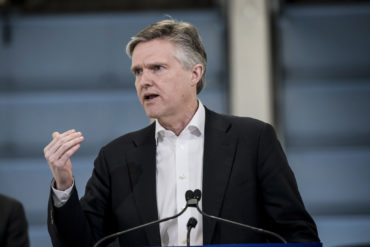 Ontario Premier Doug Ford has made drastic changes to his cabinet just months after including auto reforms in its first budget.

Taking over as finance minister – and in effect, the auto insurance file – will be Rod Phillips. The former finance minster, Vic Fedeli, has been moved to the ministry of economic development.

For insurers, who are actively advocating for auto reforms in the province, the shuffling of finance ministers won’t cause much of a sea change, says the Insurance Bureau of Canada’s Pete Karageorgos. IBC is familiar with Philips from his time as the environment minister.

“From the industry’s perspective, we’ve had interactions with Minister Philips in environment and very positive results and had a good grasp of the issues and the files, so we anticipate the same type of operation in terms of his role as finance minister,” said Karageorgos, IBC’s director of consumer and industry relations‎ in Ontario.

The Ontario government’s environmental plan included consultation with the insurance industry, Karageorgos added. “Phillips and his staff were very receptive about hearing what the industry had to say and what our experiences were. Because, really, that’s what impacts the people of Ontario.”

If past experience is the best measure of future performance, IBC is positive about the changes, even if some may view the cabinet shuffle as a major upheaval in Ontario’s government.

“I think the government is very willing to consult and listen widely, just as Minister Fedeli was in finance,” Karageorgos said. “The government there started down a plan. They put statements in the Ontario budget with respect to the auto insurance system in Ontario needing to be improved or fixed. So we are very optimistic that we will continue to have good relationships with the new minister.”

Auto reforms in Ontario’s budget, announced in April, included the ability to use credit scores as one way to determine a driver’s rates, along with plans to double coverage for catastrophic impairment. The budget also called for ways to reduce auto insurance premiums by increasing the range of coverage choices.

As for any delays in progress due to changes, Karageorgos is hopeful there will be little disruption. “There has been some work that has been done in response to some of the initiatives that the ministry of finance has announced that are in progress right now, so we anticipate those will continue. From that perspective, it appears to be that everything is still moving forward.”

There are also positive vibes coming from the appointment of Doug Downey as the new attorney general. He previously served as the parliamentary assistant to the finance minister, so he will be able to take his knowledge of the auto file to his new role.

“There are auto insurance-related issues and the like that the ministry of the attorney general, moving forward, will have to look at,” Karageorgos said. “So I think having a minister who is familiar with the challenges that Ontario drivers face is a good thing.”