CALGARY – The ride-hailing service Uber is now free to do business in the City of Calgary. 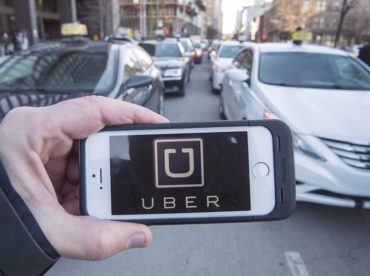 The Uber logo is seen in front of protesting taxi drivers at the Montreal courthouse, on February 2, 2016. Calgary city council has passed a bylaw that would allow for the operation of ride-sharing companies, but officials with Uber say the rules are too strict. THE CANADIAN PRESS/Ryan Remiorz

City council has voted to amend its rules, meaning the fee structure for ride sharers would now be scalable and the application process for drivers would be better streamlined.

It means Uber drivers could be on the road as early as this week.

Officials with Uber released a statement on Monday, saying that it is pleased that council voted to approve the bylaw changes.

Earlier this year, the city changed the Livery Bylaw to make accommodations for ridesharing companies but at the time, Uber said they could not do business under the rules.

Only five companies registered with the city under the previous rules, with just over 80 drivers on the road working for them.

The Livery and Transportation Committee held intensive meetings on those changes leading up to the vote on Monday and ultimately came back with the decision to reject the changes.

However, administrators advised council to go ahead and approve the changes.

Dozens of taxi drivers attended the council meeting on Monday, all in opposition to the changes, saying that the city is doing too much to appease one company.