California asks US for $7.4 billion for wildfire rebuilding

SAN FRANCISCO – California Gov. Jerry Brown and lawmakers asked the U.S. government Friday for $7.4 billion to help rebuild after a cluster of fires tore through the heart of wine country, killing more than 40 people and leaving thousands without housing. 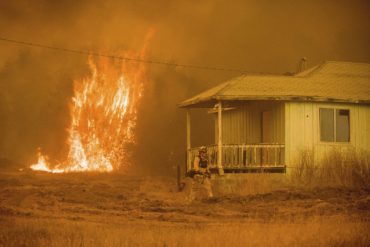 Flames rise behind a vacant house as a firefighter works to halt the Detwiler wildfire near Mariposa, Calif., on Wednesday, July 19, 2017. As wildfires rage throughout the western U.S., one California blaze in the rugged mountains outside of Yosemite National Park forced thousands of nearby residents to flee their homes. (AP Photo/Noah Berger)

In a letter to the White House, Brown joined California’s two U.S. senators and 39 members of its 52-member congressional delegation to urge President Donald Trump and Congress to quickly adopt a disaster-related appropriations measure to support the state’s recovery.

Brown said the funding would go toward cleanup and programs to support housing, transportation, agriculture, environmental protection and other services for those affected by the fires.

A series of blazes that started in Northern California the night of Oct. 8 killed at least 43 people and destroyed about 8,900 homes and other buildings. At the peak, thousands of firefighters battled 21 blazes that burned simultaneously.

Officials have not yet assessed all the damage and effects of the fires, but the governor’s office and the affected counties determined that $7.4 billion in federal funding is needed to help California recover, the letter says.

The wildfires significantly damaged farmland, rangeland and watersheds, and more than a third of the funding requested, $3.1 billion, would go toward helping agricultural industries bounce back, including affected wineries, California officials said.

“The full economic impact to the agricultural, tourism, hospitality, and wine industries is still not known,” the letter says. “Nine California wineries were destroyed and 21 were damaged in the nation’s most prominent winemaking region.”

Congress last month approved $576.5 million in aid for wildfires earlier this summer in California and the U.S. West. It also has approved billions in relief funding to help states affected by hurricanes and other weather-related disasters this year.

Trump pledged aid for California fire victims on Oct. 10, saying he had told Brown that “the federal government will stand with the people of California.”

Brown said he has asked the California Department of Finance to expedite doling out $41.5 million to support the immediate needs of victims not eligible for federal aid.

During the wildfires last month, Brown declared a state of emergency for the Northern California counties of Solano, Napa, Sonoma, Yuba, Butte, Lake, Mendocino and Nevada as well as Orange County in the south.