SACRAMENTO, Calif. – California’s state fire department is stretched thin just as the bone-dry state enters the peak of its wildfire season, with vacancy rates exceeding 15 per cent for some firefighters and supervisors. The vacancy rate is more than 10 per cent for some fire engine drivers, according to statistics provided to The Associated Press. 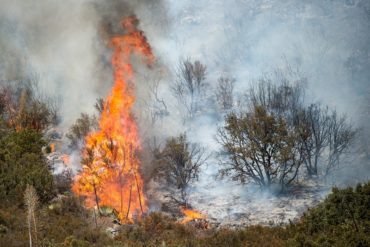 The Blue Cut fire burns in Upper Lytle Creek near Wrightwood, Calif., on Friday, Aug. 19, 2016. Firefighters were on the offensive Friday as they worked to expand significant gains against a huge wildfire that chased thousands of people from their homes in Southern California. (AP Photo/Noah Berger)

A five-year drought and changing weather patterns have transformed what once was a largely summertime job into an intense year-round firefight, said California Department of Forestry and Fire Protection spokeswoman Janet Upton.

“It’s not the old days where we were a seasonal department with a season that lasted a few months,” she said. “It’s an increasingly challenging job, no thanks to Mother Nature and climate change.”

The shortage means that the state firefighting department is forced during weather conditions fanning large blazes to keep firefighters on duty for long hours as they do backbreaking, dangerous work trying to put out massive wildfires that have become bigger and more frequent in recent years.

Nearly 25 per cent of departing employees over the last two years have told officials they quit for better-paying jobs with other firefighting agencies, according to the statistics provided to the AP by CalFire.

The union that represents the state firefighters who fight fires outside urban and suburban areas blamed low pay, as more than 100 members, families and representatives of other unions protested in Sacramento on Monday.

Union and department officials said California has enough state firefighters to keep the public safe – at the expense of firefighting men and women who frequently work for weeks without days off without seeing their families.

He worked 47 straight days fighting one large fire last year and said he worked three weeks with no break this year, most of it fighting a Monterey County fire that has burned more than 134 square miles.

“With the pay inequities, the shifts we work and the turnover, we’re running less and less people,” Walker said. “There may be a concern where the public is at risk due to the long hours.”

Union members are seeking a mid-contract pay raise that would give compensation above the $60,000 a typical firefighter is paid each year in salary and overtime. Fire captains typically make more than $85,000 and the salaries of battalion chiefs exceed $98,000.

RT if you have a friend, family member or other loved one on the frontlines of California wildfires #firefighters pic.twitter.com/NTpvDxI5hM

A 2014 study by the state’s human resources department found state firefighters receive one-third less in pay and benefits, on average, than their counterparts at fire departments for 18 California cities and two counties surveyed.

The state firefighting department is responsible for preventing and fighting wildfires over terrain that covers about a third of California – more than 48,000 square miles spanning the Sierra Nevada foothills and the coastal mountain ranges from Santa Barbara to the Oregon border.

The federal government primarily handles firefighting at higher elevations, while local agencies are responsible for urban and suburban firefighting.

The department’s survey of departing employees supports the union’s complaint that there is a sizable exodus for better-paying jobs, although state officials could not immediately say if vacancy or departure rates were higher than in previous years.

But the union wants the state to shorten the standard 72-hour work week that includes overtime and increase pay to bring state firefighters closer to the 56-hour standard workweek for urban firefighters.

Negotiations for higher state firefighter pay broke down about four months ago after Gov. Jerry Brown’s administration made a last offer that the union rejected as unacceptable. Lopez declined to reveal the offer, which he said was not disclosed to the union’s membership.

Administration spokesman Brian Ferguson called firefighters “everyday heroes,” but added in a statement that “the state must balance the needs of many different bargaining units and the overall state budget.”

State firefighters’ duties have changed as they try to protect an increasing number of rural homes built in the midst of tinder-dry brush and trees, a problem that continues to grow, said University of California, Riverside, professor Richard Minnich, who studies fire ecology.

“Maybe people are leaving because it’s too damn dangerous,” he said. “In urban firefighting, not only are the hours more reasonable but they’re also looking mostly at single structure events.”