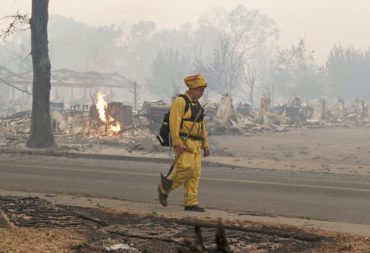 Stockton firefighter Sean Caywood walks past an apartment complex destroyed by fire Sunday, Sept. 13, 2015, in Middletown , Calif. California Gov. Jerry Brown has declared a state of emergency in Lake and Napa Counties after a wildfire charred more than 60 square miles within 12 hours, prompting thousands to flee their homes. Brown said Sunday the declaration will expedite debris removal and waive fees to people who need to replace official documents lost in the fire. The blaze, about 100 miles north of San Francisco, has destroyed an unconfirmed number of homes and other buildings and damaged highways and other infrastructure. (AP Photo/Eric Risberg)

In addition, a fifth Northern Californian who was last seen in his home before it was destroyed by the fire is missing and presumed dead.

The California Department of Forestry and Fire Protection released a detailed, 500-page report into the cause of the 120-square-mile wildfire that devastated a large portion of rural Lake County and parts of Napa County about 90 miles north of San Francisco in September 2015.

The wiring of the hot tub on residential property owned by John and Cindy Pinch in Cobb, California, “was not installed according to building code,” investigators found.

The property owners are now being investigated for possible criminal charges and whether they are responsible for any of the $57 million it cost to extinguish the 2015 fire.

“We have not found a permit on file,” Pimlott said Wednesday at a press conference in Lake County.

Pimlott says investigators are discussing with the state Attorney General whether the homeowners will be sued.

Lake County District Attorney Don Anderson said at the press conference that he is reviewing the report and launching an investigation to determine if criminal charges should be filed.

“That’s very difficult to answer mainly because I haven’t read the report,” Anderson said. “We are involved with four deaths and that could be a whole range of criminal activity. Obviously there was destruction of a lot of property.”

The fire was the state’s third most destructive blaze and forced the evacuation of tens of thousands of residents and businesses.

The blaze burned for more than two weeks and dry, windy condition made the initial days especially harrowing. The first confirmed fatality was Barbara McWilliams, 72, who suffered from advanced multiple sclerosis and used a wheelchair.

The report says it appears McWilliams tried to escape the flames that engulfed her Lake County home on Cobb Mountain by crawling into her fireplace.

In addition to McWilliams, firefighters found the remains of three other people.

Robert Lichtman, 61, has not been seen since the fire destroyed his Lake County home and no remains have been found. He was last seen in his home.

State officials say the cost of the damage will exceed $1.5 billion.

“It’s pretty upsetting that a stupid little mistake like that could have caused so much devastation. It actually floors me,” said Gary Herrin, who had sobbed as he walked through what little remained of his destroyed childhood home days after the fire past through his old neighbourhood.

Lake County Supervisor Rob Brown said Wednesday he doesn’t want people distracted by the cause of the fire. He wants to stay focused on rebuilding the community.

“I can’t help but think the people who are responsible for this must be going through hell themselves,” he said. “It’s awful all the way around.”