California wildfires could cost insurers up to US$8 billion: Aon Benfield

Historic wildfires in portions of California last month could cost insurers as much as US$8 billion, according to Aon Benfield’s Global Catastrophe Recap for October. 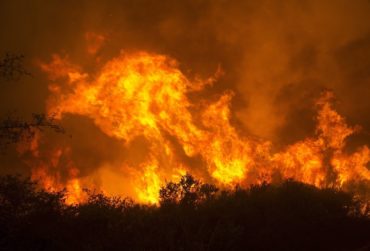 FILE- In this Oct. 9, 2017, file photo, flames from a wildfire burn in Napa, Calif. California Gov. Jerry Brown joined lawmakers to request $7.4 billion in federal funding for wildfire relief and recovery efforts following a deadly cluster of fires that that tore through the heart of the state’s wine country, killing more than 40 people and leaving thousands without housing. (AP Photo/Rich Pedroncelli, File)

The report, released on Thursday by Impact Forecasting, the catastrophe modelling development centre of Aon Benfield, noted that the California Department of Insurance has cited that at least 19,000 residential, commercial and auto claims have already been filed, with payouts exceeding US$3.32 billion. “This total was expected to rise to as high as US$8 billion as additional claims are processed,” the report said. “On [an] aggregated basis, this is [the] costliest insured wildfire event ever recorded.”

The outbreak of wildfires in early October killed at least 43 people and injured 185 others. Nearly two dozen fires were ignited as the blazes – notably the Central LNU Complex Fire around the town of Santa Rosa – would “aggregate together as the most damaging event on record in the state,” the report said. Data from Cal Fire (the California Department of Forestry and Fire Protection) indicated that nearly 9,300 structures were damaged, of which more than 8,560 were destroyed. The worst damage was noted in Napa, Sonoma, Mendocino, Lake, Solano, Butte and Yuba counties.

Another significant wildfire outbreak – this time in central and northern Portugal – killed at least 45 people as the fires swept through several districts, notably Coimbra, Viseu and Castelo Branco, causing significant property and commercial damage. The Portuguese Association of Insurers indicated that the total insured losses were likely to reach US$232 million, which would be the costliest event on record for the local industry, the report said. Additional fires caused at least four fatalities in northwestern Spain.

In Canada, a deep low pressure system brought powerful wind gusts and heavy rainfall to portions of British Columbia, Alberta, Saskatchewan and Manitoba from Oct. 16-18. Extensive damage was noted, including toppled trees and power lines, damaged vehicles, structural damage to roofs and sidings and damage caused by airborne debris. Damage to agricultural structures was additionally noted and extensive power outages ensued due to damage to the grid, the report noted. There were no reports of any casualties, but early indications were that both insured and economic losses would reach into the “tens of millions” in U.S. dollars.

On Oct. 29 and 30, heavy rainfall and gusty winds associated with the remnants of Tropical Storm Philippe brought widespread damage to parts of Ontario and Quebec. Most damage resulted from flood inundation and downed trees and power lines onto homes, businesses and vehicles. At the event’s peak, hundreds of thousands of customers were without electricity. Total insured and economic losses were also estimated into the tens of millions in U.S. dollars.

Other events that occurred in October include: