Can scientists predict when the next exceptional high tide will occur along the St. Lawrence River?

Residents of eastern Quebec probably remember the exceptional weather conditions and the very high tide of Dec. 6, 2010. The combination caused flooding along the shores of the St. Lawrence River and millions of dollars in damage to public and private infrastructure.

The water level recorded that day at Rimouski’s tidal gauge (a device used to measure sea level) reached 5.5 metres, exceeding the 1914 record by 20 centimetres. Exceptional high tides occur more often than once every 100 years, however. On Jan. 11, 2016, strong winds and high tides again caused flooding along the eastern Quebec coast.

When might the exceptional high tides of the St. Lawrence River strike next?

As physical oceanography researchers at the Institut des sciences de la mer de Rimouski (ISMER), we addressed this question in an article published in 2016 in the scientific journal, Le Naturaliste canadien.

First, we need to understand which ingredients produce a high tide. The tide is a daily fluctuation of the sea, with levels alternately rising and falling. Primarily, this oscillation is driven by the gravitational attraction that the moon and the sun exert on the mass of ocean water. This is called an astronomical tide.

But changes in sea level can also be caused by variations in air pressure and winds. This is called a meteorological tide. 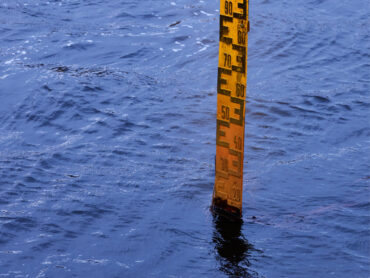 To generate exceptional high tides, both astronomical and meteorological tides must occur at the same time. Great astronomical tides are predictable decades or even hundreds of years in advance, because the movements of the stars are well known.

In contrast, high meteorological tides are associated with storms, and are only predictable a few days in advance, with considerable uncertainty about their magnitude.

This makes it impossible to anticipate well in advance the next co-occurrence of high astronomical and meteorological tides along the St. Lawrence River. However, it is possible to predict the times of the year when exceptional high tides are most likely to occur. To that end, it is necessary to understand the workings of the astronomical tide.

Tides at the whim of the stars

The gravitational pull of the moon is stronger than the sun’s. Although the moon is much smaller than the sun, it is also much closer to the Earth, so its force of attraction outweighs that of the sun. The moon generates two high and two low tides per day, known as a semi-diurnal tide.

The tidal range is the difference between successive high and low tides. In Rimouski, Que., the tidal range of the semi-diurnal tide caused by the moon is 2.54 metres.

Like the moon, the tides caused by the gravitational pull of the sun generate two high and two low tides each day, but with a lower tidal range: 0.81 metres in Rimouski.

On the other hand, when the sun and moon are at right angles to the Earth (first and last quarter of the moon), their effects on the tides are offset. The high tide caused by the moon arrives at the same time as the low tide caused by the sun. This generates weak tides called neap tides, with a tidal range of 1.73 metres in Rimouski.

High spring tides are on average 0.8 metres greater than the high neap tides in Rimouski. The spring/neap cycle is about 15 days.

But to get truly large astronomical tides, you have to consider even longer cycles, some of which are less well known than others. Equinox tides arrive twice a year around March 20 and Sept. 22 (plus or minus a week because of the spring/neap cycle).

If we are looking at the maximum level of high tides rather than the tidal range, we should also consider the average water level of a tidal cycle, which also has a semiannual cycle: it is almost 10 centimetres higher at solstice than at equinox in Rimouski, and therefore prevails over the semiannual cycle of semi-diurnal tides.

The highest astronomical tides therefore appear close to solstice in Rimouski and not during equinox, but the difference in this semi-annual cycle is only a few centimeters, which does not explain the occurrence of exceptional high tides.

The role of atmospheric pressure

The second ingredient needed to produce an exceptionally high tide is the meteorological tide.

During a storm, when air pressure drops, the atmosphere exerts less weight on the sea. Sea level then tends to rise locally.

In addition, winds blowing towards the coast push the water towards the shore and raise the sea level at the coast. The strong waves generated by the wind are then able to surge higher up the shore.

During the storm of Dec. 6, 2010, the maximum water level recorded at the Rimouski tide gauge exceeded the maximum level predicted by the astronomical tide by about one metre. This is much higher than the semi-annual variation of astronomical tides, but it is similar to variations of the spring/neap cycle.

So, can we predict the occurrence of very large tides? Exceptional high tides in the St. Lawrence River can happen at any time of the year, and not just during solstice or equinox, providing that there is a heavy storm during spring tides.

As storms are generally more intense in winter than in summer along the St. Lawrence River, exceptional high tides are more likely to occur in winter, as shown by the recent events of Dec. 6, 2010, and Jan. 11, 2016. Fortunately, during the winter, sea ice limits wave formation and protects the shore from their impact.

However, given the decreasing presence of sea ice due to global warming, the risk of high tides flooding the Gulf of St. Lawrence and its estuary during winter will most certainly increase in coming decades.

Dany Dumont is Executive Director of the Quebec Maritime Network He holds and has received funding from the Natural Sciences and Engineering Research Council of Canada (NSERC), the Quebec Research Fund – Nature and Technology (FRQNT), the Marine Network Environmental Observation, Prediction and Response (MEOPAR), the Quebec Maritime Network (RQM) and several provincial and federal departments (Ministry of Public Security of Quebec, Ministry of Transport of Quebec, Environment and Climate Change Canada, Fisheries and Oceans Canada).

This article is republished from The Conversation under a Creative Commons license. Disclosure information is available on the original site. Read the original article: https://theconversation.com/can-scientists-predict-when-the-next-exceptional-high-tide-will-occur-along-the-st-lawrence-river-186160