WASHINGTON – Viable alternatives to Line 5 already exist if the controversial cross-border pipeline gets shut down, says a new report from a Canadian environmental group looking to bridge the ideological gulf in the public debate over North America’s continuing dependence on fossil fuels.

The report, commissioned and released Wednesday by the Toronto-based group Environmental Defence, recommends upgrading Enbridge Inc.’s new Line 78 pipeline to handle the bulk of the energy Line 5 currently delivers to Ontario and Quebec, as well as several Midwestern states.

“I recognize the threat that Line 5 really does pose and I’m aware of all the factors at play that really do set us up for an ecological disaster in the making,” said Michelle Woodhouse, the group’s water program manager and one of the co-authors of the report.

But Woodhouse said it’s equally clear that North America currently lacks the extensive infrastructure it would take in order to immediately end Canada’s dependence on oil and gas and replace it with renewable energy sources.

“We don’t have all of that set up to completely shut down every pipeline right now,” but the report provides options that would allow Line 5 to be closed with minimal impact, she said.

“I just wanted the public to know what the actual data says about our true dependence on this pipeline, and see if there was a viable way to shut it down that didn’t have to compromise between protecting the Great Lakes and meeting our present-day crude oil needs.” 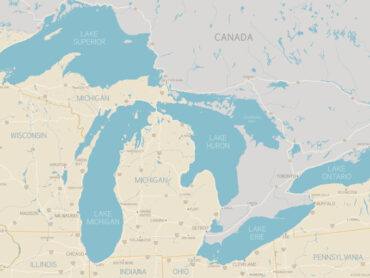 Critics of Line 5, including Michigan Gov. Gretchen Whitmer, want the pipeline shut down immediately for fear of a looming ecological disaster where it crosses beneath the Straits of Mackinac, an environmentally sensitive shipping lane that links Lake Huron with Lake Michigan.

Proponents call Line 5 a vital and indispensable source of energy, especially propane, for several Midwestern states, including Michigan, Ohio and Pennsylvania. It is also a key source of feedstock for critical refineries on the northern side of the border, including those that supply jet fuel to some of Canada’s busiest airports.

Line 78 extends across the southern part of the state to link Sarnia, Ont., with junctions in northwestern Indiana at the southernmost tip of Lake Michigan, where it connects with existing lines from Superior, Wisc., where Line 5 originates. It was completed in 2015 as a replacement upgrade for Line 6B, best known as the pipeline that spilled 3.1 million litres of oil into Michigan’s Kalamazoo River in 2010.

The report makes a case for upgrading Line 78 even further to carry the bulk of Line 5’s crude-oil load, while the remainder – a best-case estimate of 119,000 barrels per day – could be handled by additional rail or marine tanker capacity, with only a minimal impact on the environment.

“The closure of Line 5 is inevitable – either through court order or due to a rupture,” the report says, noting that either outcome would lead to energy shortages throughout the myriad regions and facilities that depend on it for energy.

“A better solution is a planned shutdown where Enbridge, the refineries and governments sort out how best to meet demand without Line 5. What this report clearly demonstrates is that options exist.”

Enbridge, however, insists that’s not the case.

Line 78 is already operating at full capacity serving other customers, the company said in a statement, adding that only two of the pipelines in its Mainline network – Line 5 is one – can handle the natural gas liquids that are used to make the propane that comprises nearly half the demand in Michigan alone.

“Enbridge’s Mainline system is at capacity and is regularly apportioned – or oversubscribed,” the statement said.

“The one thing proved by this misguided plan is that a shutdown of Line 5 would have a significant and immediate impact on the region’s energy supply, businesses and hard-working families in Michigan, Ohio, Pennsylvania and Canada’s two largest provinces. It makes no sense.”

The report says the two sections that comprise Line 78 are currently able to carry 570,000 and 500,000 barrels of oil per day, but could be upgraded to capacities of 800,000 and 525,000 respectively – what the report describes as the “ultimate design” scenario.

Line 5, by comparison, has a maximum daily capacity of 540,000 barrels, although neither pipeline is currently operating at full strength, the report notes. “This means spare capacity already exists within Line 78 to largely make up for the closure of Line 5.”

The report says in the “constrained” Line 78 scenario, a Line 5 closure would leave a shortfall of 255,000 barrels per day to be made up elsewhere, while the shortfall shrinks to 119,000 barrels under the expanded-capacity model.

It estimates that two to three additional trains on routes already transporting oil could handle that additional 119,000 barrels, as could a single additional marine tanker. And it projects a nominal increase in the price of gasoline: 1.8 cents per litre.

Enbridge, however, insists that it would take too long to develop and obtain approval for the necessary increases – a conclusion already reached by Michigan’s own energy task force. And it makes a point of emphasizing the environmental impact of adding trains, trucks and tankers to the network.

The plan, they argue, “would put the environment at risk as it would burn more fuel to transport energy, clog critical roads and rail lines and create unnecessary energy dislocations while raising prices.”

Martin Meyers, an independent energy analyst and 40-year veteran of the industry on both sides of the Canada-U.S. border who helped in compiling the report, said the capacity numbers are based on the company’s own data, submitted to regulators in 2013 as part of the process of replacing Line 6B.

The historic data for deliveries of crude oil and natural gas liquids to Sarnia are for the combined volumes shipped on both Line 5 and Line 78, he added.

As for the problem of natural gas liquids, there is already plenty of natural gas production and refining capacity in the region south of the border to more than meet that demand, Meyers said: “There’s a significant resource that is being produced, and with growing volume.”

Feature image: This photo taken in October 2016 shows an above-ground section of Enbridge’s Line 5 at the Mackinaw City, Mich., pump station. Michigan Gov. Gretchen Whitmer has ordered the pipeline shut down because of concerns about a potential spill in the channel that connects Lake Huron and Lake Michigan. Enbridge is resisting the order with the support of Canadian officials who say Line 5 is essential to their economy. The disagreement comes months after U.S. President Joe Biden upset Canada by canceling the Keystone XL oil pipeline project.(AP Photo/John Flesher)