The industry is making progress on getting a national flood insurance program, but a key challenge is getting all provinces, territories and Ottawa to agree on how it should work, the Insurance Bureau of Canada’s CEO suggested Tuesday.

Unlike Britain and the United States (which have Flood Re and that National Flood Insurance Program respectively), Canada does not have a national backstop for overland flood insurance.

“In Canada, with the federal government, 10 provinces and three territories – we have to get them all to somehow agree to a national program, which has not been an easy task. We are much closer to that today than we were, say, five years ago,” IBC CEO Don Forgeron told a room full of industry professionals at Swiss Re’s Canadian Annual Outlook Breakfast. 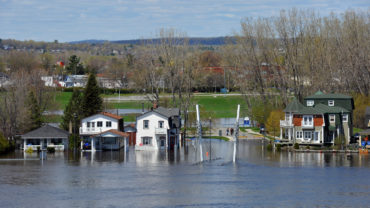 He was asked by Canadian Underwriter whether Flood Re – which the British government rolled out in 2016 – is a good model for Canada to follow.

“For many years I have been saying we are the only G7 country without a flood program, but the other six didn’t work,” Forgeron said at the breakfast, held at One King West in Toronto’s financial district. “I am going to change that now because the British one is probably the closest to a functional model we have been able to find.”

He did not go so far as to recommend that Canada put something similar in place.

With Flood Re, the British government is trying to have the vast majority of properties at low flood risk subsidize a small minority of properties at high risk. Every home insurer in the U.K. must pay a levy towards flood Re. On top of that, when a primary insurer covers flood for a given home, Flood Re then charges that primary insurer a premium tied to the home’s council tax band, which in essence is a tool used in Britain to put a value on the property for tax purposes.

“We have been over to the U.K. to look at Flood Re model and the federal government has also been over to look at it,” Forgeron said Tuesday during the Swiss Re breakfast. “In all the jurisdictions we have looked at, where they fail is with the high risk properties. That’s where the vast majority of their losses come from, and the question becomes, how do you price that? If it’s not full risk-based pricing, who pays it? And how is it paid? That’s usually where these programs fall down and that’s what the federal government has asked us to take a look at in terms of some sort of high-risk pool.”

For its part, the United States brought in the controversial National Flood Insurance Program in 1968. In order to qualify for flood insurance under NFIP, the property must be in a community that has joined the NFIP and agrees to enforce sound floodplain management standards.

NFIP owed the federal treasury US$30 billion by 2017, at which point $16 billion was forgiven. But NFIP borrowed billions more to cover losses from hurricanes Harvey, Irma and Maria, which hit Texas, Florida and Puerto Rico respectively in late 2017.

Some critics say properties insured by NFIP should pay a premium that more closely reflects actual risk. A law intended to do exactly that was passed in 2012 but later repealed after politicians complained some constituents saw huge increases in their home insurance rates.

In Canada, managing flood risk is more important with the increasing frequency of severe weather events, Forgeron said Tuesday.“These events are no longer affecting only areas that have traditionally been exposed to risk. Twenty per cent of Canadian households some vulnerability to floods and that figure is increasing.”

IBC urges governments to spend more on educating consumers about their risk of water damage and to improve land use planning.

“Too many communities are still making bad decisions and everyone acts shocked when their low-lying subdivision wakes up to three feet of water.”