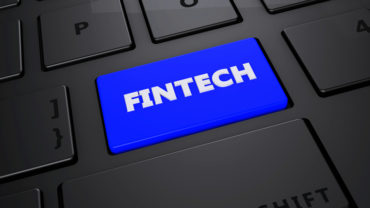 EY’s Fintech Adoption Index 2017: The rapid emergence of FinTech shows Canada’s fintech adoption rate has increased from 8% to 18% since 2015, notes a statement from EY Canada, which provides assurance, tax, transaction and advisory services.

Looking at past, current and anticipated future use of fintech, the report detailing study findings indicates the percentages for Canada are 8%, 18% and 34%, note the Canadian findings of the report. 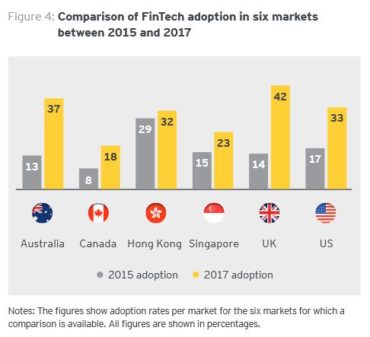 Findings further indicate that insurance, money transfer and payments are expected to see the biggest hikes in uptake, the statement adds. Telematics and wearables, regulatory changes and the inclusion of rate comparison services in this year’s survey “will all contribute to the insurance fintech adoption rate of 24% in the future.”

The report notes “insurance has expanded into telematics and wearables (helping companies to predict claim probability better), as well as premium comparison sites in certain markets.”

In fact, “insurance has moved from being the least commonly used service in 2015 to the second most popular service this year, largely due to the inclusion of insurance premium comparison services.” This is an improvement, but still lags things like money transfer and payments fintechs.

“Globally, fintech users have moved from early-adopters in our 2015 study to early majority in 2017, with 33% of the surveyed population indicating they are regular users of fintech services,” states the report.

The research shows the following:

“We now find that, on average, one in three digitally active consumers use two or more fintech services. That is significant enough for us to suggest that fintech has reached early mass adoption,” suggests the report.

In EY’s 2015 study, 16% of “surveyed consumers had used two or more fintech services in the prior six months, with adoption potentially doubling in the near future. The 2017 study reveals this has happened in just 18 months,” it states.

“Fintech firms have reached a tipping point, and are poised for mainstream adoption across our 20 markets,” the report concludes.

EY points out, though, that the 52% only reflects “the 17 services included in our survey, whereas we can expect the fintech industry of the future to include services that are currently insufficiently mature or yet to be developed.”

“Banks are increasingly looking for improvements across the entire value chain – from gamification of compliance training to surveillance software,” notes the EY Canada statement.

“Established financial services firms face both ‘unbundling’ and ‘rebundling, of their propositions resulting in disruption of traditional customer relationships,” it suggests. “We are moving to a world where products are unbundled from full-service incumbent firms and rebundled by wraparound platforms that let consumers manage their finances on the go via mobile, disrupting traditional customer relationships,” it explains.

This “creates opportunities for start-ups and established firms to collaborate.”

For Canada, however, it has one of the lowest fintech adoption rates around the world. “Only 18% of survey respondents in Canada have used two or more fintech services in the last six months, compared to 33% globally,” EY Canada reports.

Not knowing about fintechs is likely the primary reason the adoption rate is not higher in Canada, the statement suggests. Survey findings, for example, indicate 22% of respondents report they had not heard of any fintech – far lower than the 49% of respondents two years ago – but still considerably lower than respondents globally.

All that said, EY Canada expects awareness is poised to increase dramatically, propelling the adoption rate here to 34% in the future.

Overall, EY points out that lack of awareness of fintechs in the six aforementioned markets has dropped since 2015. Overall, respondents who cited this factor as a barrier to using fintech services have declined from 38% to 16%, the report notes. “The average across all 20 markets is 86%,” it points out.

Another reason – indeed, the second-most cited – for not using a fintech is that respondents prefer to use a traditional services provider for their needs, EY Canada advises. “This attachment to traditional players means fintechs have to double down to build their brands and establish themselves in this competitive market,” it adds.

“When it comes to banks and fintechs, we’re seeing what used to be a competitive mindset turn into a desire to collaborate,” says Ron Stokes, EY Canada’s fintech leader. “It’s becoming clear that working for mutual benefit, rather than competing with each other, will result in more meaningful innovations, faster,” Stokes suggests.

Citing the importance of partnerships between banks and fintechs, he points out, “banks are looking for faster and easier ways to boost their digital capabilities, both on the consumer side and in the back office. At the same time, Canada’s fintechs need access to more customers and resources to improve their offerings.” 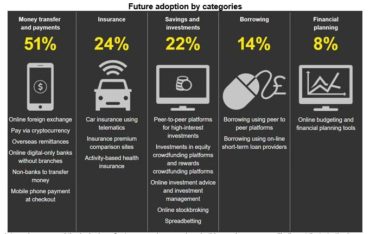 Of course, choosing the right partner is critically important, as is having strong innovation cultures to implement any new technologies. Fintechs, for their part, “need to better articulate the clear benefits of their technology and work with banks to deliver change,” suggests EY Canada.

The report notes the findings “reflect considerable consumer appetite for new and innovative financial service products that take advantage of new consumer technologies, such as mobile and cloud.”

Business models that drive mass adoption include offering a previously paid-for service free of charge; creating something new and compelling; and distributing across an existing customer base, the report suggests.

“FinTech firms share two core characteristics: a laser-like focus on the customer proposition and a willingness to apply technology in novel ways,” it states.

“These are powerful differentiators in a marketplace where many product-focused incumbent financial services companies struggle to deliver the seamless and personalized user experiences that consumers increasingly expect,” the report notes.

“Fintech and non-financial services firms represent a threat to incumbent firms’ market shares, revenues and strategic models. However, they also create opportunities for incumbent firms to differentiate themselves and become more competitive,” it adds.