The odds of that happening would be “extremely rare, on the order of a 1-in-10,000-year return period,” Michael Young, vice president of model product development at RMS, told Canadian Underwriter in an interview Tuesday. “But the fact that [it is] possible under realistic scenarios according to our model is noteworthy and something to which we want to draw the insurance industry’s attention.

“With our new HD modelling framework, we start talking about return-period numbers that are not common yet in the vernacular of the insurance and reinsurance industry. They are baked into our simulation process, so they are being accounted for when you calculate the exceedance probability (EP) curve.”

The EP curve describes the probability that various levels of loss will be exceeded. “A lot of the reinsurance deals are in the range of a 1-in-250 to 500-year return period, or maybe the 1,000-year return period,” Young said. These 1-in-10,000-year events are “something as an industry we do need to pay attention to — those long, long tail events.”

Young spoke to Canadian Underwriter about five years after Canada’s costliest disaster — the Fort McMurray, Alta., wildfire that cost the industry about $3.6 billion in losses. He discussed topics such as how the landscape is changing for wildfire risks in Canada, what insurers should be looking out for, and how brokers can help their clients prepare. 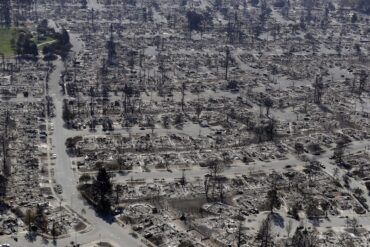 FILE – In this Oct. 14, 2017 file photo, an aerial view shows the devastation of the Coffey Park neighborhood after a wildfire swept through in Santa Rosa, Calif. California Gov. Jerry Brown has thrown his support behind limiting liability for electric utilities when their equipment causes wildfires. (AP Photo/Marcio Jose Sanchez, File)

“You have a run that occurs with high-wind events and dry weather, and that’s what drives the tail of wildfire risk in both Canada and the U.S.,” Young said. “[When] we brought our U.S. and Canada [wildfire] model to market, one of the things we did in our modelling was to make sure we explicitly accounted for that.”

“Insurance companies need to pay attention to that correlation of those losses in highly-dense areas.”

At $3.6 billion in insured losses, Fort McMurray is the costliest wildfire event in Canadian history. Still, a $20-billion loss event is not inconceivable, particularly in the United States. For example, the 2017 wildfires in California cost the American P&C industry $14.6 billion in 2020 dollars, according to the Insurance Information Institute.

In Canada, Young cited the the Okanagan, B.C., fires near Kelowna in 2003. RMS looked at “‘what-if’ scenarios — like, what if the wind was higher? What if the fire protection services weren’t in place at the time?” Based on that analysis, Young said, that event “could have been three-and-a-half times larger had [the wildfire] penetrated into some of those urban areas like it did in Fort McMurray.”

Feature image: A giant fireball is seen as a wild fire rips through the forest 16 km south of Fort McMurray, Alberta on highway 63 on May 7, 2016. THE CANADIAN PRESS/Jonathan Hayward