Ice loss from Canada’s Arctic glaciers has transformed them into a major contributor to sea level change, according to recent research by glaciologists at the University of California, Irvine (UCI). 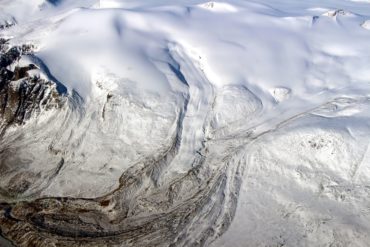 Canada’s glaciers and ice caps are now a major contributor to sea level change, a new UCI study shows. Ten times more ice is melting annually due to warmer temperatures. Seen here is the edge of the Barnes Ice Cap in May 2015. NASA / John Sonntag

From 2005 to 2015, surface melt off ice caps and glaciers of the Queen Elizabeth Islands grew by an “astonishing” 900%, from an average of three gigatons to 30 gigatons per year, results published last week in the journal Environmental Research Letters found. The Queen Elizabeth Islands are the northernmost cluster of islands in the Canadian Arctic Archipelago, split between Nunavut and the Northwest Territories.

The research team found that in the past decade, overall ice mass declined markedly, turning the region into a major contributor to sea level change. Canada holds 25% of all Arctic ice, second only to Greenland, the release pointed out. 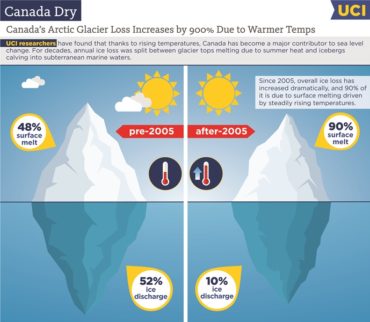 The study, titled Mass budget of the glaciers and ice caps of the Queen Elizabeth Islands, Canada, from 1991 to 2015, provides the first long-term analysis of ice flow to the ocean, from 1991 to 2015. UCI said in the release that the Canadian ice cap has glaciers on the move into the Arctic Ocean, Baffin Bay and Nares Strait. The researchers used satellite data and a regional climate model to tally the “balance” of total gain and loss each year, and the reasons why. “Because of the huge number of glaciers terminating in area marine basins, they expected that discharge into the sea caused by tide water hitting approaching glacier fronts would be the primary cause,” the release said.

However, they determined that until 2005, the ice loss was caused about equally by two factors: calving icebergs from glacier fronts into the ocean accounted for 52%, and melting on glacier surfaces exposed to air contributed 48%. But since then, as atmospheric temperatures have steadily climbed, surface melt now accounts for 90%.

Millan said that in recent years ice discharge was only a major component in a few basins, and that even rapid, short term increases from these ice fields only had a minor impact on the long-term trend. “We identified meltwater runoff as the major contributor to these ice fields’ mass loss in recent years,” he added. “With the ongoing, sustained and rapid warming of the high Arctic, the mass loss of the Queen Elizabeth Islands area is likely to continue to increase significantly in coming decades.”