Canadian auto sales to edge down in 2017: Scotiabank

Canadian auto sales are expected to edge down to 1.94 million units in 2017, coming off four consecutive record years, according to the Scotiabank Global Auto Report, released on Tuesday. 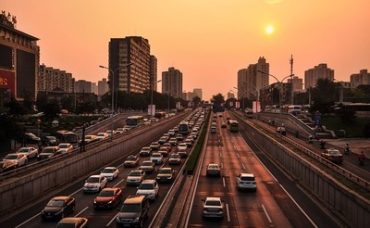 Gains in Alberta and Saskatchewan are expected to be more than offset by declines in Ontario, Quebec and Atlantic Canada, according to the Scotiabank Global Auto Report. Credit: Scotiabank.

Despite the beginning of a sales recovery in the resource-rich provinces, gains in Alberta and Saskatchewan are expected to be more than offset by declines in Ontario, Quebec and Atlantic Canada, Scotiabank reported in a statement.

“Recent price increases for new cars and light trucks have started to dampen affordability, and will likely outweigh the positive impact of stronger economic growth in Canada this year,” suggested Carlos Gomes, senior economist and auto industry specialist at Scotiabank. “Although vehicle sales in the commodity-producing provinces are finally starting to recover from the sharp double-digit declines of recent years, activity in the rest of the country is likely to trend lower.”

Looking at the provinces, the report said that the downturn in the Alberta auto market, which included a 30% peak-to-trough slump, has come to an end. Firmer oil prices and the rebuilding in Fort McMurray are expected to boost economic growth in the province to around 2% this year, reversing the first back-to-back annual economic contraction since the early 1980s.

In Saskatchewan, economic activity and vehicle purchases are also bottoming, with late-2016 sales largely in line with a year ago. “This represents a significant improvement from a peak-to-trough decline of nearly 20% through the third quarter of 2016,” Scotiabank said in the statement. 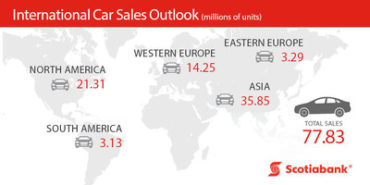 By contrast, purchases in Ontario will likely edge down to 796,000 units this year from a peak 802,000 units in 2016. The moderation reflects slightly lower vehicle production over the coming year, the statement said, adding that housing and the auto sector accounted for one-third of the overall increase in economic activity in Ontario last year.

Sales are also likely to edge down in Quebec, but purchases are expected to remain above 460,000 units for the second consecutive year, supported by stronger exports and the highest leasing penetration in Canada.

On the west coast, British Columbia has been the second strongest auto market in Canada in the latest expansion and Scotiabank expects sales to remain unchanged this year as economic activity remains solid outside of a “less-hot” Vancouver housing market. Real estate activity accounts for nearly 20% of the provincial GDP and the slowdown in the Vancouver housing market will likely dampen overall economic growth across the province, Scotiabank said in the report. However, exports have gained momentum and the province has the strongest labour market in Canada.

In Manitoba, sales have remained steady in recent years at 56,000 units. Scotiabank expects a similar performance in 2017, with volumes supported by stronger manufacturing activity.

In Atlantic Canada, vehicle purchases were flat last year at 149,000 units, but are expected to decline to 135,000 this year – the lowest level in four years. “Newfoundland will continue to be the source of weakness, with volumes falling to a five-year low of only 32,000 units alongside rising unemployment,” the release said. “Purchases will hold up better in the Maritimes, but will also be constrained by sluggish labour markets and weak demographic trends.”

Scotiabank is Canada’s international bank and a financial services provider in North America, Latin America, the Caribbean and Central America and Asia-Pacific. With 23 million customers, it provides a range of services, including personal and commercial banking, wealth management and private banking, corporate and investment banking, capital markets, as well as advice and products and services. Scotiabank has a team of more than 88,000 employees and assets of $896 billion as of Oct. 31, 2016.