Three-quarters of Canadian CEOs (75%) see disruption as an opportunity for their business, not a threat, and 86% said their business is actively disrupting its sector rather than waiting for disruption by competitors, according to a new survey from audit, tax and advisory firm KPMG. 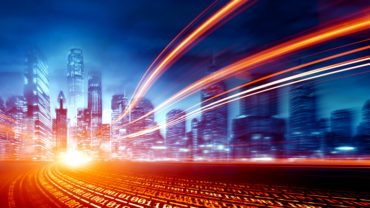 Launched on Tuesday, the second annual 2017 Canadian CEO Outlook provides insights into the major forces disrupting the Canadian business landscape and perspectives on how CEOs are equipping their companies and themselves to manage these challenges over the next three years, KPMG noted in a release. The Canadian survey is part of a study by KPMG member firms across the globe that included 1,261 international CEOs in 52 countries. In Canada, the survey included perspectives from 51 Canadian CEOs in 11 industry sectors across a three-year horizon.

Overall, the survey found that despite today’s economic, geopolitical and technological uncertainty, Canadian CEOs are more optimistic about their company’s growth in the next 12 months than their global counterparts.

“This year’s Outlook emphasizes that disruption has become a fact of life for Canadian CEOs and their businesses as they respond to heightened uncertainty,” said Elio Luongo, chief executive officer and senior partner at KPMG in Canada. “Importantly, Canadian CEOs see disruption as an opportunity to transform their business model, develop new products and services and reshape their business so it is even more successful than it was in the past.”

While three-quarters of Canadian CEOs see disruption as a business opportunity, the vast majority (98%) of Canadian CEOs (compared to 74% of global CEOs) believe that “in three years, they will largely be the same company they are today.” 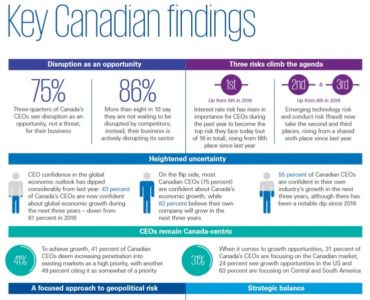 Business digitization was the report’s number one focus area, rising from sixth place last year. Limiting brand risk in an age of transparency rose from fourth place to tie at first place in 2017. Greater speed to market came in as the second top priority, while three others tied for third place – stronger client focus, talent development and becoming more data driven. “Innovation, often seen as a strong path to growth, and part of the government of Canada’s strategic economic agenda, is not among the top priorities,” the release noted.

To drive growth, 41% of Canadian CEOs are prioritizing increased penetration in existing markets, 20% by vertically integrating their supply chain and only 16% are focusing on innovation, the release pointed out. This compares to their global peers who plan to drive growth through a wide variety of strategies, including increasing penetration in existing markets (53%), focusing on innovation (47%), penetrating new verticals (32%) and expanding into new geographical markets (21%).

According to the survey, Canadian CEOs are focused on the impact of geopolitical risk, with the majority (86%) reporting bolstering their management teams to better understand geopolitical risk and 84% spending more time on scenario planning given today’s uncertain geopolitical climate. Globally, 52% of CEOs believe the political landscape has had a greater impact on their organization than they have seen for many years and 31% think protectionist policies in their country will rise in the next three years, the release added.

Looking at cyber, a growing number of CEOs said that they feel “fully prepared” for a cyber event, but many are less prepared for hacking and ransomware attacks. Over one-third (37%) said that they are fully prepared for a cyber event, compared to 42% of their global counterparts. However, 63% of survey respondents said that are only “somewhat prepared” for social media hacking and 59% are only somewhat prepared for a ransomware attack, an employee-led breach or a distributed denial of service (DDoS) attack.

Regarding confidence in the global economic outlook, it has dipped significantly from 81% in 2016 to 43% this year. Conversely, three-quarters of Canadian CEOs (75%) are confident about Canada’s economic growth, while 82% believe their own company will grow in the next three years. Similarly, more than half (55%) are confident in their own industry’s prospects for growth in the next three years, down from 85% in 2016. When it comes to growth opportunities, 63% of those polled are focusing on Central and South America, 31% are focusing on Canada and 24% see growth opportunities in the United States.

The survey was conducted between Feb. 21 and April 11. The majority of respondents (90%) represent publicly-owned companies, with 41% reporting revenues between $500 million and $999 million, 33% reporting revenues between $1 billion and $9.99 billion and 25% reporting revenues in excess of $10 billion. Sectors represented in this year’s survey include energy and utilities, banking, retail/consumer markets, manufacturing, investment management, automotive, insurance, telecom, technology, life sciences and infrastructure. Of the respondents, 53% have held their position for five years or less and 58% have been with their company for more than six years.