CALGARY – In an industry that lives and dies by the weather, farmers like Dwight Foster are looking for all the help they can get to know what’s coming. 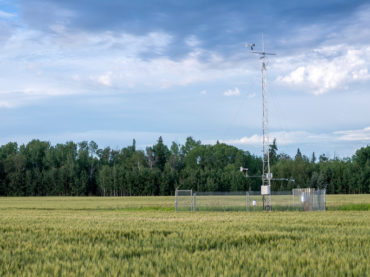 “We use every tool in the toolbox we can get our hands on to try and figure out what’s going on,” said Foster, co-owner of North Gower Grains south of Ottawa.

With about 25 farms to manage, he has signed up with a service that plants weather stations throughout his properties that tell him whether the wind is calm enough to spray his fields or if it’s dry enough to till the earth.

“It’s more high-tech than ever. We have weather stations on our farms, they’re telling us wind speed, wind direction, temperatures high and low, rainfall amounts on almost every one of our farms.”

Farmers like Foster are on a never-ending quest for more detailed weather forecasts as they try to increase yields on larger plots while contending with more extreme weather, such as the record rains that have drenched parts of southern Ontario this year, or the droughts that have left vast fields bone dry in Saskatchewan.

Foster said he installed the weather station system upon the encouragement of seed companies, since knowing exactly how much rain has fallen allows him to buy specific seeds, depending on the conditions.

That kind of data could prove especially useful this year, with some of Foster’s farms soaked with triple the rainfall compared with last year. Environment Canada says the Ottawa area is on track for its wettest year.

In Saskatchewan, Todd Lewis is dealing with the opposite problem. The area south of Regina where he farms has been struggling with some of the driest months on record.

Lewis uses a service that sets up personalized weather stations to better manage the grains and pulses on his family farm. At roughly 4,500 hectares, the operation is part of an overall trend that saw the average farm size increase almost 13 per cent between 2006 and 2016.

He said field-level information helps him make decisions around harvest time, like whether to keep working a few extra hours before an oncoming rainfall or assessing if weaker crops were caused by parched soil.

He said he has noticed improvements in both the short- and long-term forecasts – even if he doesn’t like what they predict.

“The long-range forecasting, unfortunately this year they’ve been kind of correct,” he said.

“They predicted dry and it’s been dry. So sometimes you wish they were wrong.”

Despite the better data, Lewis said there is still a degree of uncertainty when it comes to knowing what Mother Nature will bring.

“Anything outside of a week, you’re going to be pretty skeptical about it.”

Precision agriculture companies are, however, hoping to reduce that gap with the reams of information they’re collecting.

“I think every farmer, at the top of their wish list, would be better seasonal forecasts so they can know what to expect,” said Andy Nadler, product manager at Farmers Edge.

The company, along with Canadian competitors like Weather Innovations Consulting and a growing field of international rivals, are trying to use new ways to crunch data to help guide farmers.

Nadler said Farmers Edge is learning from the more than 3,000 weather stations it has installed since starting to offer them about three years ago. It charges about $2 an acre (0.4 hectares) for its data management service.

“Long-range forecasting is an art, and it is a very risky thing to do,” said Lerner. “It really does come down to a great deal of prayer.

“There’s too much going on, too much chaos in the atmosphere? It is not a solvable equation. All we can do is get better at estimating.”