The insured loss from the wildfire in May in Fort McMurray, Alta. will be “somewhere between” $3.6 billion and $4.6 billion, with European reinsurers covering nearly half of the loss, analysts from A.M. Best Company Inc. suggested Thursday. 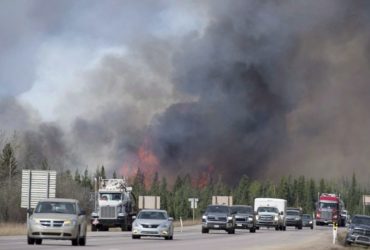 A convoy of cars and trucks pass wildfires as they are evacuated from Fort McMurray, Alta., on highway 63 south of the city on Saturday, May 7, 2016. The newspaper that serves Fort McMurray is bracing for more change six months after a wildfire forced its staff to flee the northern Alberta city along with more than 80,000 other people. THE CANADIAN PRESS/Jonathan Hayward

“The reinsurers are the ones shouldering a good portion of it,” Joel Silverthorn, senior financial analyst with Oldwick, N.J.-based A.M. Best, said in Toronto at the ratings firm’s annual Insurance Market Briefing Canada.

In May, 2016, a wildfire in Northern Alberta resulted in the evacuation of about 88,000 people, including the entire city of Fort McMurray.

“My guess is by year end it will fall somewhere between the two,” Silverthorn said Thursday during the market briefing.

“The vast majority of the ultimate costs” of last May’s wildfire “will be borne by insurance policies of one variety or another,” IBC vice president Bill Adams said this past July.

At the time, Adams suggested that in early summer 2013, economic losses from floods affecting southern Alberta were about $6 billion but insured losses were only about $1.7 billion due in large part to a lack of residential overland flood coverage.

This makes Fort McMurray the largest insured loss so far in Canadian history. Before 2013, the second most expensive insured loss, at $700 million was the 2011 wildfire that affected Slave Lake, Alberta, Property and Casualty Insurance Compensation Corp. said at the time. Taking top spot at that time was the 1998 ice storm affecting Eastern Canada. Slave Lake has since been knocked to fifth place (with the 2013 Alberta flood, the 1998 ice storm and the July 8, 2013 Toronto area rain storm –  which cost insurers about $1 billion – ranking second, third and fourth respectively).

“I think the industry has learned a lot from Slave Lake and had to take that and expand it into Fort McMurray,” Silverthorn said Thursday, suggesting the Fort McMurray disaster “was an unmodelled event.”

“They still have a long way to go to be able to really see what their exposures are,” to wildfire, Silverthorn added,

“This was an event no one expected,” Silverthorn said of Fort McMurray. “Afterwards, everyone said, ‘Well, yeah, of course it was going to happen,’ but did anyone think of it before that?”

A.M. Best “has taken no ratings actions based on results from the Fort McMurray fire,” the company said in a Best Special Report – Canadian Review/Preview 2016 A Return to Sustainable Growth? A.M. Best suggested many of the “top” home and auto insurers writing in Alberta “have been able to absorb the losses without material impact to their risk-adjusted capital positions.” For smaller carriers writing in Alberta, “it may take more time to assess the extent of impact on profitability and capitalization measures.”