Why Canadian insurers should feel lucky after 2017

After a year of massive North Atlantic hurricane losses, Canadian P&C insurers may have dodged a bullet with this year’s renewal season. 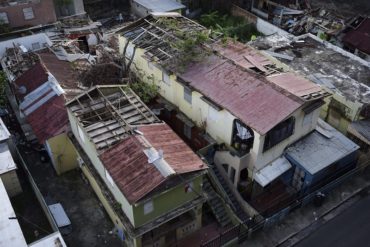 In this Nov. 15, 2017 photo, some roofs damaged by the whip of Hurricane Maria are shown still exposed to rainy weather conditions, in San Juan, Puerto Rico. The Department of Homeland Security’s internal watchdog says his office will be investigating how a tiny Florida company won more than $30 million in contracts for desperately needed relief supplies following Hurricane Maria. The Associated Press first reported last month that Bronze Star LLC failed to deliver the emergency tarps and plastic sheeting needed to cover tens of thousands of Puerto Rican homes damaged by the storm’s winds. The Federal Emergency Management Agency eventually terminated the contracts without paying any money. (AP Photo/Carlos Giusti)

Reinsurers licensed in Canada “were the main beneficiaries of the relatively quiet Canadian CAT year,” wrote Joel Baker, president and CEO of MSA Research Inc., in MSA’s recently-released quarterly outlook report for 2017 Q3. The combined ratio in reinsurance in Canada improved 39% – from 123.5% during the first nine months of 2016 to 84.5% during the same period last year.

“This against the disastrous global reinsurance industry which was hammered in 2017 by hurricanes Harvey, Irma, Maria and most recently the devastating wildfires in California,” Baker added. “Canadian primary insurers should count their blessings that that an event of the magnitude of the Fort McMurray fire didn’t happen this year, otherwise the 2018 renewal season would have been extremely tough.”

The wildfire affecting Fort McMurray, Alberta in the spring of 2016 was Canada’s most expensive insured loss to date, costing the industry nearly $4 billion.

Worldwide, the reinsurance industry had combined ratio of 95.2% in 2016, A.M. Best Company Inc. reported earlier. In Down But Not Out: Reinsurers Look to Reposition Amid Market Disruption, released Sept. 5, 2017, A.M. Best said it has “significant concerns” about the global reinsurance market, which is “far from thriving and appears to be operating amid malaise.”

California’s insurance department reported wildfires affecting the northern part of the state cost the industry more than US$9 billion.

Swiss Re reported last month that insured losses from from Hurricanes Harvey, Irma and Maria put together were more than US$90 billion. Before those storms, the most expensive disaster was Hurricane Katrina, which cost the industry $80.7 billion, adjusted for inflation to 2016 U.S. dollars, Swiss Re reported earlier. In 2017, global insured losses from both natural and man-made disasters were about US$136 billion in 2017, compared to the previous 10-year annual average of US$58 billion, Swiss Re said.