The Transportation Safety Board of Canada reiterated Wednesday its recommendation for “additional physical defenses” on railways in case crews fail to obey signals. 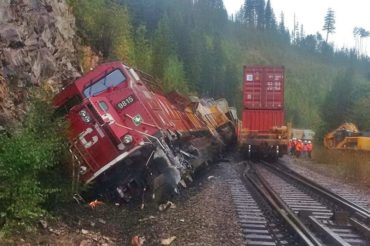 On Sept. 6, 2015, a Canadian Pacific freight train enroute from Revelstoke, B.C. to Saskatchewan hit a westbound freight train near Beavermouth, B.C. TSB reported that no one was injured.

The westbound train was about 12,000 feet long and had entered a siding that was 9,980 feet long. The collision occurred when the eastbound train operated past a stop signal at the east siding switch and struck the side of the westbound train, a portion of which was still on the main track.

About three minutes earlier, the eastbound train had passed a signal displaying a Clear to Stop signal but the crew “did not call out the signal indication within the cab or over the radio,” TSB said in a report on the accident released Jan. 25, 2017.

TSB – a separate organization from Transport Canada that investigates incidents in aviation, marine, pipeline and rail – made seven findings as to cause and contributing factors in the 2015 Canadian Pacific collision. One of those was that the eastbound train “operated past the stop signal” at the east siding switch.

TSB also made three findings as to risk.

“If existing signal systems are not enhanced to include physical fail-safe capabilities, failures to follow signal indications will continue, and the risk of train collisions and derailments will persist,” TSB said.

In Canada, centralized traffic control “does not provide automatic enforcement to slow or stop a train before it passes a Stop signal or other point of restriction,” TSB said in the report. “Train crews must be familiar with the signal indications specified in the (Canadian Rail Operating Rules) and must control their trains in accordance with these rules.”

In an investigation released in 2000 into a 1998 collision – also involving two Canadian Pacific freight trains in B.C. – TSB recommended that Transport Canada and the railway industry “implement additional backup safety defences to help ensure that signal indications are consistently recognized and followed.”

The 2013 recommendation was made in a report into a February, 2012 derailment of a VIA Rail passenger train that killed all three operating crew members. A train enroute from Niagara Falls to Toronto was travelling at 67 miles per hour. It entered a crossover – east of Aldershot station – where the limit was 15 miles per hour. Eleven seconds later it derailed. The locomotive slid down an embankment, rolled over and struck a building foundation.

As a result, the cab roof area was crushed downwards.

“Wayside signals provide a physical signal installation combined with an administrative requirement to follow the signal indication,” TSB said in its investigation report into VIA Rail derailment near Aldershot, northeast of Hamilton. “This defence relies on the train crew to observe the signal, recognize the intent of the signal, and take appropriate action.”

“Since 1952, passenger locomotives were also equipped with a fully functioning” automatic train control system, TSB said of the Amtrak northeast corridor. “The ATC system incorporates cab signals and speed control with a penalty brake. If a train operator does not respond to the signal displayed in the cab, the system automatically applies a penalty brake application to control the train speed in accordance with the signal displayed.”

Positive train control technology “can offer additional defences in some circumstances,” TSB said in the report released Jan. 25 on the 2015 collision in B.C. “For example, if an operating crew does not respond appropriately to a signal or other restriction, PTC is supposed to alert the crew that they are not reacting as expected. If there is no further action by the crew, the system should then intervene to slow or stop the train by applying the brakes.”

Deficiencies in following railway signal indications is on the TSB watch list, which is comprised of safety issues the agency says need to be addressed. The latest watch list was released Oct. 31, 2016.

“Some railways in Europe and the United States, for example, have train control systems that will sound an alarm in the locomotive cab or even stop the train in the event that the crew does not respond appropriately to a signal displayed in the field,” TSB said in its watch list. “However, similar technology has not yet been implemented on any federally regulated railway in Canada.”

In Toronto, the subway system has a system – widely used on commuter train systems in North America since the 1930s that “automatically stops a train when the signal aspect and the operating rule prohibit such a movement,” TSB noted in 2013 its report on the 2012 VIA Rail derailment near Aldershot. The Toronto Transit subway system “operates by mechanical engagement of a trip arm, which is attached adjacent to the field side of the rail,” TSB noted. “On each train, there is a trip valve that is connected directly to the train air brake system.”

“The transponders are passive devices that require no energy source other than that of a passing train,” TSB noted, adding ACSES was initially installed between Boston and New Haven, Conn. “They contain basic information and are permanently fastened between the rails of a track on top of the ties, in sets of at least two. ACSES uses transponder information, data radios and train speed information to perform calculations and enforce permanent and temporary speed limits as well as positive stops at interlockings and signals displaying stop indications.”