The governments of Canada and the United States have asked the International Joint Commission (IJC) to “explore more fully the causes, impacts, risks and potential solutions to flooding in the Lake Champlain-Richelieu River basin.” 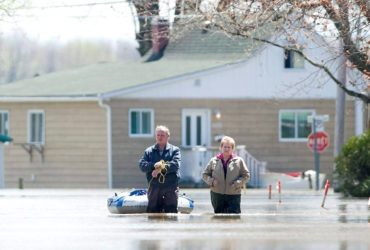 A couple make their way along a street immersed by flood waters from the Richelieu River in the town of Saint-Blaise-Sur-Richelieu, Que., Sunday, May 8, 2011. Devastating floods in the Prairies and Quebec along with wildfires that razed about a third of the northern Alberta town of Slave Lake took the first three spots on David Phillips’ list of the top 10 weather stories of 2011. THE CANADIAN PRESS/Graham Hughes

Established by the Boundary Waters Treaty of 1909, the IJC is a binational organization mandated to prevent and resolve disputes, primarily those concerning water quantity and quality, along the Canada-U.S. border, Global Affairs Canada explained in a press release on Thursday. Stéphane Dion, Canada’s Minister of Foreign Affairs, announced the action to address the risks associated with recurrent floods in the Lake Champlain-Richelieu River basin, located in southern Quebec, northeastern New York State and northwestern Vermont.

“After careful review of the recommendations made by the IJC in its July 2013 report, Plan of Study for the Identification of Measures to Mitigate Flooding and the Impacts of Flooding of Lake Champlain and Richelieu River, Canada and the United States have asked the IJC to proceed with its implementation and explore more fully the causes, impacts, risks and potential solutions to flooding in the Lake Champlain-Richelieu River basin,” the release said.

Among other items, the work will involve the evaluation of the causes and impacts of past floods, particularly one event in 2011; assessing the possibilities offered by floodplain best management practices; evaluating possible adaptation strategies to the expected future variability in the water supplies; developing and making recommendations for implementing, as appropriate, an operational, real-time flood forecasting and flood inundation mapping system for the Lake Champlain-Richelieu River watershed; performing a quantitative and qualitative assessment of potential flood management and mitigation measures and their impacts on important resources of the system; and climatic projections, wind wave and ice models.

The governments are requesting that the IJC complete these activities within five years and prepare an initial workplan within six months.

The IJC has extensive and unique experience in handling the full range of regional transboundary water issues, including its work on a previous request related to flooding in the Lake Champlain-Richelieu River basin, Global Affairs Canada noted in the release.

The International Lake Champlain-Richelieu River Technical Working Group presented to the IJC its final report and technical reports on Nov. 30, 2015.

Recognizing that changing conditions in boundary water basins have significant implications for economic, social and environmental interests along the border, the Government of Canada allocated up to $19.5 million over five years in Budget 2016 to enable Canada to study water quality, quantity and flooding issues in four Canada-U.S. boundary basins. Of this, $7.53 million will be allocated to the IJC to explore potential flood plain management solutions and a range of moderate structural and non-structural flood prevention and mitigation measures in the Lake Champlain-Richelieu River basin.

The Richelieu River flood in spring 2011 was “arguably the worst overland inundation in southern Quebec since Confederation and Quebec’s worst natural disaster since the Saguenay flood in 1996,” Global Affairs Canada reported. “In at least 20 municipalities, waters inundated streets up to a kilometre from the riverbanks. Water did not just drain into the Richelieu River, southerly winds also pushed metre-high waves into the river from Lake Champlain. With overpowering force, water surged north at volumes as much as five times greater than the Richelieu River’s average year-round flow.”

Dion said in the release that the work will improve the “physical, social and economic security” of residents on both sides of the border.

“Reducing the risks and effects of flooding will have a real and positive impact on the lives of residents in the Lake Champlain-Richelieu River basin,” added Denis Paradis, MP for Brome-Missisquoi. “The work of the IJC, in collaboration with federal, provincial and local efforts, will contribute to ensure a secure and sustainable future for the people in this region, particularly with respect to water quality.”