Canadians are “decidedly supportive” of the legislation that bans drivers from using hand-held devices in every province, and a majority believe the time has come to implement distracted walking legislation in their municipality, according to a new Canada-wide poll. 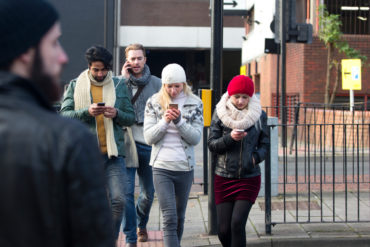 Released on Wednesday, the poll from Vancouver-based Insights West was based on an online survey conducted in early September, among a representative sample of 1,013 Canadian adults. The data was statistically weighted according to Canadian census figures for age, gender and region, Insights West said in a press release. The margin of error – which measures sample variability – is +/- 3.1 percentage points.

In the survey, 93% of those polled agreed with every Canadian province and territory – with the exception of Nunavut – having distracted driving legislation, which forbids the use of hand-held cell phones by drivers.

Some Canadian municipalities are contemplating distracted walking legislation that would forbid the use of hand-held cell phones by people who are on a roadway (for example, while crossing a street). Insights West noted that in July, Toronto City Council passed a motion calling for the province of Ontario to amend the Highway Traffic Act to ban residents from using mobile devices “while on any travelled portion of a roadway.” Two City of Vancouver councillors have also voiced support for a ban, the release added. 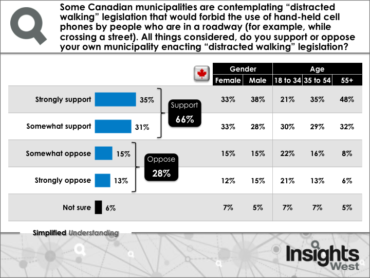 But in spite of the high level of agreement with existing distracted driving legislation, only 51% of Canadians believe it has been effective in curbing the use of hand-held cell phones by drivers in their province, the poll found. Residents of Alberta (49%), Atlantic Canada (44%) and Ontario (41%) are more likely to believe that existing distracted driving laws have been ineffective, while only one-in-four Quebecers (25%) feel the same way.

“Canadians are definitely happy with the existence of distracted driving legislation, yet they continue to see drivers using hand-held devices with no consequences,” said Mario Canseco, vice president of public affairs at Insights West. “It is this perceived failure of enforcement that is making Canadians question the effectiveness of the law.”