More than two-thirds (67%) of polled Canadians responded incorrectly when asked if an expensive car always costs more to insure that a cheaper car, according to a new survey on Canadians’ financial literacy. 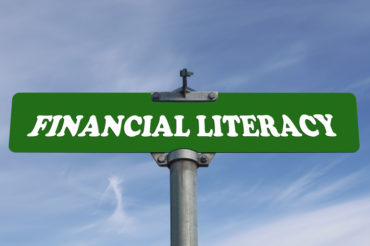 Commissioned by Toronto-based LowestRates.ca, which provides a free, independent service that helps consumers save time and money by comparing personal financial products, the survey showed that Canadians may be overestimating their financial literacy skills. The study, released on Tuesday, found that a majority of Canadians (78%) said they are financially literate, but when tested on their knowledge with a series of questions, nearly six in 10 failed to make the grade.

For the survey, a sample of 1,001 Canadians aged 18+ from Ipsos’ online panel were interviewed. The precision of Ipsos online polls is measured using a credibility interval. In this case, the poll is accurate to within ±3.5 percentage points, 19 times out of 20, had all Canadian drivers been polled, LowestRates.ca said in a release.

The quiz consisted of 15 true or false questions “and the results suggest that Canadians are especially unclear about terminology concerning mortgages, auto insurance and tax-free savings accounts (TFSAs),” the release said. Even of those surveyed who passed, most only attained a C or D grade.

The true or false questions with the highest failure rates included the following:

“Financial literacy continues to be a hot topic and we know it needs to improve, but Canadians need to be honest with themselves about what they don’t understand,” said Justin Thouin, CEO of LowestRates.ca, in the release. “For example, the area we found Canadians were the weakest in was mortgages. Considering that buying a home is probably the largest investment of your life, this is a serious problem.” 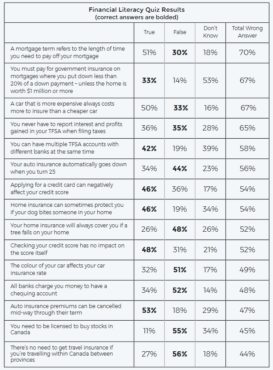 Men were more likely than women to believe they were financially literate – 84% rated themselves as excellent or good, compared to 73% cent of women. Canadians who rated their financial literacy high were more likely to pass the quiz but even so, fewer than half of them passed the test, LowestRates.ca reported.

Provincially, British Columbia was the only province that had a more than 50% pass rate (at 51%). Forty-eight per cent of those in Alberta, Saskatchewan and Manitoba passed, compared to 43% in Ontario, 35% in Quebec and 42% in Atlantic Canada.

The survey also showed strong financial literacy correlated with more educated Canadians. Nearly nine in 10 (87%) of university graduates describe their financial literacy as either excellent or good, compared to 77% of those with a high school diploma.

“Our financial literacy test is more than just understanding how to balance a cheque book and the questions are based on common questions asked by our site users,” Thouin said. “There are misconceptions out there, so we want to provide correct information about every day financial decisions like mortgage and car insurance to help people make the right choices.”

1 Comment » for Canadians “greatly overestimate” their financial literacy skills, including those related to auto insurance: survey