Can’t hear the ambulance? Turn down your radio

A B.C. driver has failed in his bid to receive a refund for his insurance premium increase and deductible after B.C.’s public auto insurer found him 100% responsible for failing to clear an intersection for an ambulance. 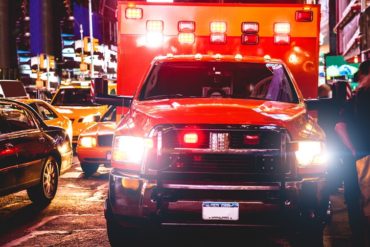 A B.C. ambulance with lights flashing and sirens blaring slowed down in an intersection, before colliding with a 2015 Jeep Cherokee driven by Sean Weatherill. The driver said he was not aware of the lights or sirens until the ambulance was already driving into the intersection, at which time he sped up to drive through the intersection to avoid “a T-bone situation.”

The ambulance struck the Jeep in the intersection, causing it to hit a light post. The Insurance Corporation of B.C. found Weatherill 100% at fault for the collision because he did not surrender the right of way to the ambulance.

“Mr. Weatherill admits that the lights and sirens were on, but says he was not aware of the ambulance until he was already in the intersection,” B.C. Civil Resolution Tribunal Member Kate Campbell found. “He says he scanned for hazards before entering the intersection, but did not see any dangers. He also says he did not hear the ambulance because of the Jeep’s sound-proofing, his radio which was playing loudly, and background noise.”

Weatherill’s vehicle was a total loss. He did not dispute the damage to his vehicle when he appeared before the B.C. small claims court, which has a jurisdiction to hear cases involving damages of $5,000 or less. Instead, he sought an order that ICBC’s liability decision be reversed, and that BC Ambulance be held at least 75% responsible for the collision.

Weatherill also sought a $300 refund of increased insurance premiums, a refund of the $300 insurance deductible, and $275 for work he missed due to the accident.

Section 177 of the B.C. Motor Vehicle Act states: “On the immediate approach of an emergency vehicle giving an audible signal by a bell, siren or exhaust whistle, and showing a visible flashing red light, except when otherwise directed by a peace officer, a driver must yield the right of way, and immediately drive to a position parallel to and as close as possible to the nearest edge or curb of the roadway, clear of an intersection, and stop and remain in that position until the emergency vehicle has passed.”

The tribunal noted that Weatherill passed a vehicle to drive through the intersection, instead of simply stopping behind the vehicle, thereby leaving the intersection clear for the ambulance.

Relying on s. 177 of the MVA, the ICBC adjuster issued a June 14, 2016 letter stating that Weatherill was 100% responsible for the collision. The adjuster wrote that two witnesses confirmed that the ambulance had its lights and sirens on before it reached the intersection, and that it slowed before entering the intersection.

“It is undisputed that the ambulance’s lights and sirens were on,” Campbell wrote for the tribunal. “While Mr. Weatherill says he did not hear or see them until he was already intersection, that did not remove his duty to yield the right of way, as required under MVA section 177. If his loud radio impaired his ability to hear and comply with section 177, as he argues, this is solely his fault. For that reason, I reject his argument that BC Ambulance ought to have installed a different type of siren.”

More News
Related
Exclusion clause for ‘conversion’ in comprehensive auto policy ‘does not come close’ to being easily intelligible: Court
By how much did your clients’ auto rates increase last quarter?
A driver is convicted of assault after a collision. Is the vehicle’s owner vicariously liable for the crash?
This ‘leading practitioner’ in insurance law is now a judge

1 Comment » for Can’t hear the ambulance? Turn down your radio