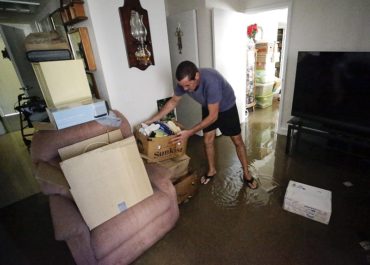 Joseph Dupuis III stacks items off the floor in his parents water logged apartment on the St. John’s River in Jacksonville, Fla. in the aftermath of Hurricane Irma, Tuesday, Sept. 12, 2017. (AP Photo/John Raoux)

The United States National Weather Service reported Wednesday that Irma is now a post-tropical cyclone and that upper-level energy “once associated” with the storm will move into the northeast on Thursday.

Irma initially made landfall in Cuba Sept. 6 before making another landfall Sept. 10 in the Florida Keys and then moving up the west Florida coast.

“National insurance writers with significant Florida property exposures and Florida-domiciled property insurers could suffer significant losses depending on the severity of the losses caused by Hurricane Irma,” noted A.M. Best, an Oldwick, N.J.-based firm that rates the financial strength of insurers.  “Outstanding catastrophe bonds sponsored by these entities could trigger after retentions and other traditional reinsurance covers have eroded.”

In its report, A.M. Best listed 33 outstanding cat bonds with Florida exposures sponsored by reinsurers and U.S. national writers, with U.S. wind-related perils or U.S.-named storms as part of the perils cover. The projected exposed amount associated with those bonds is about US$10 billion, A.M. Best noted.

In addition, A.M. Best noted, “there are 29 tranches of outstanding catastrophe bonds that are sponsored by Florida-domiciled insurers and Florida-only subsidiaries of major writers,” with a total value of about US $2.5 billion as of June 30, 2017.

“For catastrophe bonds to trigger, an insurer typically must first reach their own retention level and exhaust protection from private reinsurers and the Florida Hurricane Catastrophe Fund to the attachment level associated with each catastrophe bond,” A.M. Best said in a release.

AIR Worldwide said Monday it estimates insured losses from Irma will range from US$20 billion to US$40 billion and then on Tuesday, Karen Clark and Company said it estimated insured losses in the U.S. and the Caribbean – based on storm surge, inland flooding and wind models – will be US$25 billion.

“The abundance of capacity in the Florida property catastrophe market that over the past five years—despite a decline in rate-on-line driven by a benign loss environment and alternative capital providers—will be tested by Hurricane Irma, which has carved out a swath of destruction from the Caribbean to Florida and caused one of the largest evacuations in U.S. history,” A.M. Best reported Tuesday.

A.M. Best added that “one potential impact” from Irma “is a change in the behavior of traditional reinsurers and the use of alternative capital instruments such as catastrophe bonds, collateralized reinsurance programs, sidecar vehicles, and insurance-linked securities (ILS) funds.”