Cell phone records proved to be the deciding factor in an insurance fraud case in which a B.C. driver falsely claimed that his truck had been stolen. 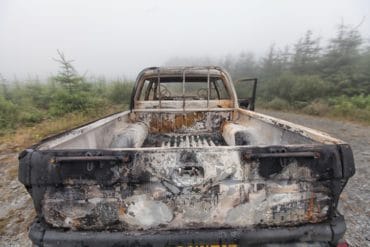 Parker Winterbottom, 22 at the time, reported to police in October 2011 that his 2006 Ford F-150 truck had been stolen. A few days later, police located the truck in a remote location east of Mission, B.C., where it had been destroyed by fire. Winterbottom made an insurance claim for the missing truck.

B.C.’s public insurer, the Insurance Corporation of B.C. (ICBC), denied the claim. The insurer argued in court that Winterbottom was involved in the loss of the truck, or at least he had failed to prove the vehicle was stolen. ICBC also told the court that Winterbottom forfeited coverage by making wilfully false statements in his claim.

However, despite a number of instances in which ICBC attempted to establish a motive for Winterbottom to make a false insurance claim – for example, debt owing on a truck that appeared to have clear mechanical issues – the court rejected most of the insurer’s arguments. In each instance, the court found the insurer had not proven that Winterbottom’s statements had been “willfully false.”

In his report to police, Winterbottom said on Oct. 21, 2011, he went to a local pub in Mission and drank heavily with his long-time friend Kyle Nygaard-Petersen. At the Mission Springs pub, Winterbottom said he parked his truck on the street in front of the pub. He remembered locking his truck using his fob key, put his keys in his pocket, and proceeded to spend a couple of hours drinking heavily at the pub with his friends Nygaard-Petersen and Andrew Waardenburg.

Winterbottom said he believed he went to bed at that point, but did not recall that. He did not report being anywhere outside the house on the night of Oct. 21.

The next day, Winterbottom said he returned to the pub and found his vehicle was no longer there. He said he went to the police station across the street and was told to check the tow yard and for broken glass. He said he couldn’t find his key, which he had lost the night before. Winterbottom told the court he had a spare key for the truck at his house, but he did not take it with him to the pub the next morning because “I was extremely hung over and not thinking clearly.”

ICBC referred in court to cell phone records that told an alternate story of Winterbottom’s whereabouts on Oct. 21-22.

“There is no explanation why the plaintiff and Mr. Nygaard-Peterson were phoning one another when, according to their evidence, they were both at the pub or, later, at the Winterbottom residence,” Bok wrote. “Mr. Winterbottom agreed he woke up at 10 am the next morning, but he could not explain how that testimony reconciled with the five cell phone calls made from his phone between 8:39 am and 9:43 am that morning other than to say he did not remember them. Critically, his testimony about where he was located contradicted with the evidence of his cell phone location at various points that night and the next morning. None of this evidence adds up.”