The program was implemented in 2002 to reward safe drivers and encourage risky drivers to change their behaviour. SGI began reviewing the program in 2012, seeking feedback from customers, stakeholders and employees and the provincial government approved recommendations for both bigger discounts and tougher penalties late last year, the insurer said in a press release on Tuesday.

Drivers start in a neutral position on the SDR program’s Safety Rating Scale and gain points for a good driving record, moving them into the scale’s Safety Zone, SGI explained in a backgrounder. Each point in the Safety Zone gives the driver a discount off their vehicle plate insurance, to a maximum of 25%. Drivers lose points for certain driving incidents, such as an at-fault collision or a traffic conviction, which moves them into the Penalty Zone.

One significant change to the program is harsher penalties for speeding convictions, SGI said in the release. Drivers will lose two points for less severe speeding infractions, excluding photo speed enforcement tickets. For example, if a driver is at +5 on the Safety Rating Scale and is charged with speed 20 kilometres per hour over the posted speed limit, currently the driver’s safety rating would not be impacted by the ticket unless they were going at least 35 km/h over the limit or charged with speeding in a high-risk zone such as a school or construction zone. But when the changes are implemented, the driver will lose two points for the offence and move from +5 (10% discount) to +3 (6%) discount on the Safety Rating Scale, resulting in a 4% loss of discount. 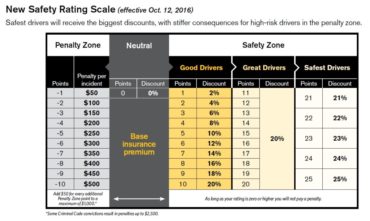 “Speeding increases your risk of being in a collision,” said Andrew Cartmell, president and CEO of SGI, in the release. “We see this play out time and time again in Saskatchewan. Tougher consequences under the SDR program should help ensure speeders get the message to slow down.”

SGI reported that in 2014, 30 people were killed and 872 injured in 1,954 speed-related collisions in Saskatchewan.

Other details of the new SDR program include:

More information on the changes is available at https://www.sgi.sk.ca/individuals/registration/rates/sdr/index.html#changes.